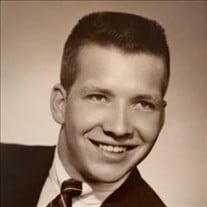 Arnold J. Schanke (Arnie), 85, of Tulsa, Oklahoma, walked into the presence of our Savior on May 12, 2022 after a prolonged illness. He was surrounded by his family, and wife of 64 years, Carolyn. Arnie was born in Sioux City, Iowa to Arnold and Dorothy Schanke on September 5, 1936. He attended Morningside College in Sioux City, Iowa from 1955-1958 and graduated with an Associate's Degree in Business Administration. He began his work career at the Sioux City Journal in the Classified Advertising department, eventually being promoted and moved to the National Retail Advertising department. In 1965, he took a position with F.W. Woolworth Co. as an Advertising Manager for the Woolco Division out of Sioux City. By 1968, his proficiency and knowledge of advertising got the attention of corporate, and he was transferred and promoted to the F.W. Woolworth headquarters in New York City, where he eventually became Assistant Director of Advertising. Although he came from the cornfields of Iowa, his adventurous spirit, work ethic, and sense of humor helped him navigate the Madison Avenue ad men climate, where he quickly gathered the respect and admiration of his colleagues. Arnie embraced the Big Apple and loved nothing more than arranging to see a Broadway show or eat at a New York restaurant with visiting family. By 1981, Arnie, Carolyn, and their five children left the New Jersey/New York metropolitan area for the green country of Tulsa, Oklahoma, where Arnie took a position with Oral Roberts Evangelistic Association. He left the excitement of the northeast so that his older children could attend Oral Roberts University as part of his contract. There, he was initially responsible for all broadcast and print material, but was soon promoted to Vice President and Director of Operations. He not only oversaw all media publications for the ministry, but also sat on the Board of Directors for University Village Retirement Center, the place where he would spend the last years of his life. In 1985, as an entrepreneur, Arnie started his own ad agency, Media Unlimited Inc., eventually bringing his son, Ken, on to help with the burgeoning business. Arnie continued that business until his eventual retirement. In his early retirement, Arnie continued to keep busy.. He sold real estate, golfed, and was involved in civic leadership, which eventually led to being elected Justice of the Peace for two years while living for a short time in Arkansas. In 2001, Arnie and Carolyn moved back into their big English Tudor home in Tulsa. His retirement activities transitioned to enjoying spending time with his 16 grandchildren, researching genealogy, and finding old friends and schoolmates on Facebook. Arnie sacrificed striving for that retirement home on the fairway for his family, putting all his time and energy into encouraging his grandchildren to do well in school, reach for the stars, and be brave enough to venture into the unknown. His fighting spirit is forever emblazoned onto the hearts of his children and grandchildren. He is survived by his faithful and loving wife of 64 years, Carolyn, his son Ken Schanke, his daughters Diane Parker, Karen Winegarner, Joyann Schanke, Hope Green, sixteen adoring grandchildren, and eight great-grandchildren. His memorial service will be at noon at Christian Chapel 7807 E. 76th Street Tulsa, Oklahoma, and the family is requesting donations be made to Clarehouse Hospice Center in Arnold Schanke's name. For more information, please visit www.clarehouse.org.

Arnold J. Schanke (Arnie), 85, of Tulsa, Oklahoma, walked into the presence of our Savior on May 12, 2022 after a prolonged illness. He was surrounded by his family, and wife of 64 years, Carolyn. Arnie was born in Sioux City, Iowa to Arnold... View Obituary & Service Information

The family of Arnold J. Schanke created this Life Tributes page to make it easy to share your memories.

Send flowers to the Schanke family.