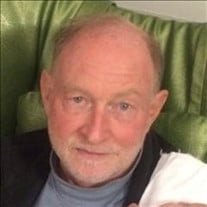 Alan Wayne Decker was born August 22, 1952 in Wichita, Kansas to Bill James Decker and Anna Belle Scholl Decker. Alan passed away on September 21, 2021 and was preceded in death by both parents and his siblings, Terry Decker and Cyndy Hill. Alan is survived by his wife, Kathy Champion, and his stepchildren and grandchildren: Jessica West (husband, Jeff and children: Ashley and Tyler), Kelley Bell (husband, Dustin and children: Nathan, Kaspar and Ellanora), Sean Comstock, Katherine Jones (husband, Corey Trammell and children: Brody, Jaxon, and Austyn), and Jennifer Vaughn. He is also survived by his sister, Chris DeWeese [husband, Ron and children: Sara Nelson (husband, Lance and son, Andrew)] of Wichita, Kansas and his sister, Dara Vernia [husband, David and sons: Shawn (wife, Whitney and children: Parker, Landon, BryseLynn, and Briggs) and Cody (wife, Kellsie and sons: Payton, Karson, and Braxton)] of Rose Hill Kansas. Alan left home at 15 and dropped out of school in the 8th grade. He was in the last group of soldiers to be drafted in the Vietnam era and credits that service for changing his life. He completed his GED and received a Bachelor of Arts degree in Economics from Wichita State University in 1979 and then a Juris Doctorate degree from the University of Tulsa in 1990. He had over 30 years of utility industry experience in various roles from Consumer Advocate and General Counsel to Director of Regulatory Affairs. He worked for the Kansas Corporation Commission (1983-1985); PSO (1985-1990); Long Island Lighting Company (1990-1991); Citizens Utility Ratepayer of Kansas (1992-1993); Nevada Power Company (1993-1995); AEP (1995-2014); and GRDA (2015-2021). Alan loved gardening and working outdoors; it was his passion and where he was most at peace. He also loved a "smoking deal" - shopped resale and was always on the hunt for quality items that he thought needed a new home. Alan laughed easily and was his own favorite comic. He loved his stepchildren and grands as his own and was generous with his time, advice, and attention. His favorite phrase was string of curse words that they all could repeat (and often did). A Private Family Service will be held. In lieu of flowers we suggest donating to the Green County Habitat for Humanity (918-592-4224). Their Restores will miss him almost as much as his family and friends. Moore's Southlawn 918-663-2233 share memories at www.moorefuneral.com

Alan Wayne Decker was born August 22, 1952 in Wichita, Kansas to Bill James Decker and Anna Belle Scholl Decker. Alan passed away on September 21, 2021 and was preceded in death by both parents and his siblings, Terry Decker and Cyndy Hill.... View Obituary & Service Information

The family of Alan W. Decker created this Life Tributes page to make it easy to share your memories.

Send flowers to the Decker family.