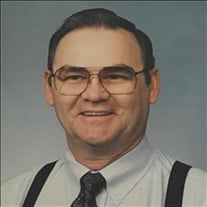 Albert Lee Austin Cantrell, age 77, resident of Tulsa, Oklahoma went to be with his Lord and Savior on Thursday morning, July 29, 2021 at his residence in Tulsa. Albert was born on August 10, 1943 in Visalia, California and was the son of Elmer Grady and Luvinard Eugene (Phillips) Cantrell. He was a 1963 graduate of Central High School of Tulsa Public Schools. Albert met his soulmate in November of 1965 while buying duck decoys from his supervisor where he saw his supervisor's daughter, Tanya. At first glance, he knew he had found his soulmate. He waited until the beginning of April to call her and they had their first date on April 9, 1966. On May 1st of that year, he proposed to her and they became husband and wife on August 20, 1966. Albert went on to work in the Aviation industry where he retired as a Aviation Inspector for Boeing in 2005 after 41 years of dedicated service. A couple of inspections that he was proud to say he inspected, as well as walked on, was NASA's International Space Station and the Space Shuttle. He also proudly served in the Army National Guard where he retired in 1984 after 20 years of service for our country as the Chief of Ammunition. He loved hunting, fishing, western movies, playing tennis, coaching and helping his daughters in all of their sports. He loved his family, grandchildren, great-grandchildren, and most of all he loved his soulmate of 55 years, Tanya. Albert is survived by his wife and soulmate of 55 years, Tanya; his children, Ninya Petty and husband, Lawan of Coweta, OK; Robin Glass and husband, Damon of Oklahoma City, OK; April Mallory of Oneta, OK; nine grandchildren, Amber Pass and spouse, Joe; Austin Cantrell, Dillan Petty, Madison Sky Stephens and spouse, Chris; Cheyanne Petty, Cole Mallory, Faryn Glass, Hope Mallory, and Presley Glass; 3 great-grandchildren Jace Pass, Jaxon Pass, Chandler Stephens and two grandsons on their way; his honorary bonus 4th daughter Andrea (Emory) Blair of Catoosa, OK. Albert was preceded in death by his parents Elmer and Luvinard Cantrell, his brother Elmer Eugene Cantrell, and Tanya's parents, whom he loved like his own, Dabner 'Jerry' Madison and Mildred Rivett. And we must not forget his precious fur-baby, Cupcake. He will be remembered as a loving husband, dad, and grandpa. Albert, Dad, and Grandpa, you will be truly missed, rest In peace. Lots of Love, Your family Viewing will be 12Noon-2PM, Tuesday, August 3, 2021 at Moore's Southlawn, 9350 E. 51st, Tulsa, OK followed by 2:00 PM, Funeral Service in the Chapel. Moore's Southlawn 918-663-2233

Albert Lee Austin Cantrell, age 77, resident of Tulsa, Oklahoma went to be with his Lord and Savior on Thursday morning, July 29, 2021 at his residence in Tulsa. Albert was born on August 10, 1943 in Visalia, California and was the son of Elmer... View Obituary & Service Information

The family of Albert Lee Austin Cantrell created this Life Tributes page to make it easy to share your memories.

Send flowers to the Cantrell family.