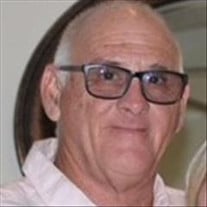 June 23rd 1958 - December 26th 2021 Andrew Duane Fiorentine went to be with the Lord December 26th 2021. He was born in Columbus Ohio, then later moved to Tulsa Ok where he and his twin brother (Tony Fiorentine) grew up and went to high school. He and his twin ,Tony, had a special bond and always said they could read each other's minds. Andrew, ( He prefers to go by Andy) went to Northeastern State University, he was captain of the football team and president of Phi Lamb fraternity... Phi lamb by Damn! He graduated with a major in economics with a minor in History and Political Science. He considered himself a nerd jock. He loved politics and history, while also having a huge love for playing sports, especially, football and basketball. He married Carol Foster who he meet at NSU ( they had a 15 year marriage), and had two children- Justin and Andrea. He remained friends with Carol throughout his life and she become one of his closet friends the last several years of his life. Andy always had a playful personality, loved to debate, and have in-depth conversations. He didn't know a stranger, always accepted and loved people as they were. He especially loved being around his family and cooking for them. Blaring his music and being in the kitchen was always his happy place. When family came over they never left hungry! He overcame many obstacles in his life, he fought and beat addiction several times. He found Jesus later in life, lived out his last years going to church regularly, honoring God and spending most of his time with his family. He was a big Believer in God's Grace. He was an amazing dad and grandpa who loved his family and treated everyone around him with kindness. Andy loved watching his son and grand-daughter play soccer, he never missed a game. He was always eager and willing to help his family with anything they needed. He will be greatly missed by his family, but we know he is having the time of his life in heaven! Andy is survived by his two kids - Justin Fiorentine and Andrea Winters, and his daughter in law Dayanara Fiorentine, Also by his twin brother Tony Fiorentine, his wife Gina and their two children Jared Fiorentine and Emile Goldenberg and their spouses Melodi and Will. Also by his grandchildren Katelyn Winters , Arielle Fiorentine, and Xavy, Joe, Diego Perez. Rest In Peace daddio/Pops. We cannot wait to see you again in heaven ~ xoxo Memorial Service will be Tuesday, January 4th - 1:00 PM at Woodlake Church, 10444 S. Mingo Rd., Tulsa

June 23rd 1958 - December 26th 2021 Andrew Duane Fiorentine went to be with the Lord December 26th 2021. He was born in Columbus Ohio, then later moved to Tulsa Ok where he and his twin brother (Tony Fiorentine) grew up and went to high school.... View Obituary & Service Information

The family of Andrew Duane Fiorentine created this Life Tributes page to make it easy to share your memories.

Send flowers to the Fiorentine family.