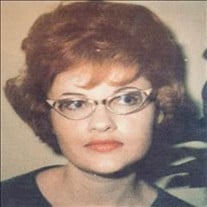 Frances "Ann" McKinney of Bartlesville passed away June 16th at the age of 80. Her husband, Bill McKinney, retired art teacher at Bartlesville High School, died in 2017. As her brother-in-law, I am the last living close member of her family. Ann was born in Dallas, Texas. Her mother moved to Norman, Oklahoma, and eventually Ann went to high school in Bartlesville. Ann and Bill were high school sweethearts and were married in Texas while Bill was going to college in 1960. Though he finished up at the University of Kansas, he went to Northeastern State in Tahlequah. I remember visiting them there in a little apartment, then going out to eat, and driving by the 4 o'clock sales in the park. I loved visiting them when we could. When Bill graduated, they moved to Bartlesville, and Ann got a job with Phillips 66. I remember many holiday meals with them, at Christmas and Thanksgiving, especially. My Mom cooked turkey or roast beef and Ann brought ham and pineapple, which was new to me. She was a good cook, having learned from her mother, I believe she said. We often went to movies together as a family, often in Tulsa. In 1963, we had a choice between Donovan's Reef and Jason and the Argonauts. I was eight and wanted to see Jason, and Ann did too. So, she took me. We had a good time and got to see John Wayne later. I remembered that kindness always. As the years passed, my brother Jimmie moved to Tulsa with Cities Service, and I went off to OSU, and we didn't see as much of them. That made the holiday meals even more special. Bill began to notice that Ann started to have trouble finding her keys every morning. That was the start of her dementia. They kept this to themselves, mostly, becoming even more distant to the rest of the world. Bill had been hurt playing football at KU. He had a form of arthritis which fused his spine which was unrelated his injury. As his health declined, he did the driving, while Ann went in to do the shopping. She would wheel him to the car and lift the wheelchair into the back of the van. In the 1980's, Mom, Jimmie, and I lived in Tulsa. On Saturdays, Bill and Ann came down to shop, and we lunched together. I loved getting to talk politics with Bill and Ann. When Bill couldn't drive as far from home, we met them for breakfast at Eggberts on 169 and Highway 20. Bill would also call every day and we took turns talking to him. During the calls, you could hear Ann commenting in the background. On OU Football Day he called at halftime to discuss the game with Jimmie. One night Ann called and said, "I think Billy's dead." She didn't know what to do and we told her to call 911. Jimmie and I took over her helping her, and we realized the extent of her dementia. She was pretty high functioning and remembered the past, but not short-term events. I got Power of Attorney and dove into the paperwork. My goal was for her to live as happy a life as possible, and I would take care of the details. It was hard on Jimmie, making the trips to Bartlesville, and waiting on me to handle paperwork or make calls. But going out to eat was the reward. She would tell me, "I don't eat meat." But she would order a cheeseburger. That was the way her brain compartmentalized information. I realized she might not remember details and facts, but she would remember emotions. I did my best to be always positive and upbeat. When Jimmie died, we continued in the same manner. Her dementia didn't seem to decline. I could call her on the phone and talk her into setting TV to the right input and channel. I obtained a list of her cable channels, and I could find what she was watching, or get her to go to a different channel. Sometimes we watched a movie "together" over the phone and laughed about it. The COVID-19 lockdown deprived her of all her socialization. Eldercare people still came three hours in the afternoon, but she had to take her meals in her room. There was a steady decline from there. At the end, we had to move her to a skilled nursing facility. I found one nearby here in Tulsa. Everyone started preparing me that she was going downhill. We all had the same goal, to make her as comfortable as possible. I got to know her, if not the details of her life. I'm better for that time I got with her. Memorial Service is pending. Moore's Southlawn 918-663-2233

Frances "Ann" McKinney of Bartlesville passed away June 16th at the age of 80. Her husband, Bill McKinney, retired art teacher at Bartlesville High School, died in 2017. As her brother-in-law, I am the last living close member of her family.... View Obituary & Service Information

The family of Ann McKinney created this Life Tributes page to make it easy to share your memories.

Send flowers to the McKinney family.