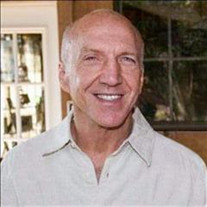 Anthony Emmett Hamilton, 78, passed away November 3, 2021 at home surrounded by his adoring wife, Song, and daughters after a yearlong battle with prostate cancer. Tony was born January 13, 1943 in Louisville, Kentucky. After high school, he served his country in the Navy, stationed in Japan. After leaving the navy, he pursued various jobs while always supporting his family. He later moved to Tulsa, Oklahoma. Tony retired in 2012 from Saint Francis Health System after 25 years where he became a certified HVAC engineer. He made many friends and built lasting relationships while at St. Francis, including meeting his loving wife, Song. Through the years, Tony loved traveling with his wife. He also loved the ocean, becoming a certified scuba diver and snorkeling every opportunity he had. He enjoyed traveling to Grand Canyon, Las Vegas, his favorite place in the world, Hawaii, Jamaica, Florida Keys, Cayman Islands, took a 5,500 mile road trip to Yellowstone, and many more places with Song, making her dreams come true. He was known by those who knew him to be one of the kindest, most genuine and generous humans in the world. Tony was a very structured, humble man always taking care of those around him. After his father passed, he moved his mother, Alberta, from Louisville, KY to Tulsa, where he took care of her for 11 years, until she peacefully passed surrounded by Tony, his brother Frankie and loved ones in 2002. Tony was a dedicated gym member known as one of the strongest men, making the young men envious of his chest and washboard abs. He made a lasting impact on all those he came into contact with over the years, and showed us all how to be the best version of ourselves. He is survived by his loving wife, Song Hamilton, his older brother, Frankie Hamilton, his children, grandchildren and great-grandchildren. We will all miss him more than you can imagine, but are relieved that he is not in pain and know he will continue to on in all our hearts. Memorial Service will be 10:00AM, Saturday, November 6, 2021 at Moore's Southlawn Chapel, 9350 East 51st Street, Tulsa, Oklahoma. Moore Funeral Home - Southlawn Chapel 918-663-2233

The family of Anthony Emmett Hamilton created this Life Tributes page to make it easy to share your memories.

Send flowers to the Hamilton family.