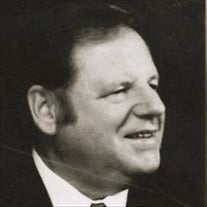 Arlan Elroy Nuss, 85, Tulsa resident, passed away Friday, February 11, 2022, at the Maplewood Care Center in Tulsa, Oklahoma. Because of Covid 19 concerns, services and burial will be held later at St. John Lutheran Church rural Sumner, Iowa. Arlan was born October 1, 1936, son of Ernest and Minnie (Schedtler) Nuss in rural Sumner, Iowa. He was baptized at St John's Luthern Church, Buck Creek, Iowa, where he was also confirmed. He attended various grade schools in Bremer County, Iowa. Arlan graduated from Sumner High school with the class of 1954. He was married to Patricia Johnson at Sumner, Iowa on October 9, 1955. They later divorced. Arlan later married Edine Reineke and they were later divorced. He served three years of active duty with the United States Army. After returning from his military service, he returned to the operation of an automobile service in Sumner, Iowa. During 1967, he moved to Tulsa, Oklahoma where he began attending Spartan College of Aeronautics and Technology. After graduating, he taught at the school for several years and then he spent his career providing flight lessons and commercial pilot services at Riverside Airport in Tulsa, Oklahoma. Flying was his passion and music, and dancing were his hobby. He enjoyed participating in church choirs and singing karaoke, when possible. Arlan was a member of Fellowship Luther Church in Tulsa, Oklahoma. After losing his medical ability to fly, Arlan was employed with Alorica, Inc. of Tulsa, Oklahoma. Arlan is survived by his special friend Rita Daniels of Peggs, Oklahoma, two sisters, Minerva Brown of Cedar Rapids, Iowa and Donna Hoeper of Waverly, Iowa, three brothers, Elroy of Fairmont, Minnesota, Michael of Ackley, Iowa, and Merlin of Overland Park, Kansas, and many nephews and nieces. Arlan is preceded in death by his parents, a brother Kenneth and a sister and brother in infancy. Memorials can be given to the Fellowship Lutheran Church Choir, Tulsa, Oklahoma. Moore's Eastlawn Chapel, 918-622-1155

The family of Arlan Elroy Nuss created this Life Tributes page to make it easy to share your memories.

Send flowers to the Nuss family.