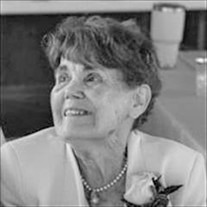 Barbara Catherine Nix, 87-year-old Tulsa resident, died early Friday morning, November 12th, 2021, at the home of her granddaughter Jenifer and Ricky Morgan in Jenks, Oklahoma. Graveside services will be held at 2pm, Tuesday, November 16th, 2021, at Memorial Park Cemetery in Tulsa, with Pastor Dale Litsey officiating. Arrangements are being handled by Moore Southlawn Funeral Home of Tulsa. Barbara Catherine (Patton) Nix was born December 18th, 1933, at home in Leedey, Oklahoma. She was one of four children, the daughter of Robert Matthew and Elsie Mae (Woods) Patton. She attended Liberty Center School in Dewey County and met the love of her life, Vernon Riley Nix, as a young girl. The two would grow up together and decide to elope and get married. Since she was only 16 and he was 18, they went to Clayton, New Mexico thinking they could be wed without parental consent, but that wasn't the case. However, her family did give permission and they were married July 4th, 1950. The newlyweds returned to Leedey and although Vernon left school, Barbara continued and graduated in 1952. They bought an 80-acre farm and lived there until Vernon was drafted December 2nd, 1952. He was stationed in Bremerton, Washington, so they moved there together and had their only child Terry Lynn on October 17th, 1954, at Bremerton Naval Hospital. In December of 1954 Vernon changed to the Army Reserves and was officially honorably discharged on November 30th, 1960. They left Washington and lived briefly in Northern California before returning to Oklahoma and settling in Skiatook. Barbara remained at home a devoted housewife and mother and Vernon worked construction until 1960 when they moved to Tulsa. They lived there 3 years, then onto the Oklahoma City area where he owned and operated 3 gas stations before returning to stay in Tulsa in 1965. Once back in Tulsa, Vernon got his welding certification and began a career in the steel industry, and Barbara graduated from Tulsa Beauty Academy and began a 40-year career as a manicurist. She worked at several salons in Tulsa over the years, providing services both at her shop and at the homes of many lifelong patrons. She was known to be an excellent cook and raised a garden yearly along with beautiful roses she shared with family and friends. Their son Terry married in 1985 to Angela Rucker and they had 2 children, Jenifer Renee Nix and Jonathan Riley Nix. Angela also had a previous daughter, Jessica Lynn Rucker, so that gave Grandma Barbara and Grandpa Vernon 3 grandkids to enjoy. They loved their grandkids and spoiled them rotten like most grandparents do. Then in 1994 Vernon became ill and was diagnosed with lung cancer. Barbara stayed home to take care of him until he passed May 8th, 1996. Although she was devastated by the loss, she returned to the career she loved at a local salon for about 10 years, and during this time she got a puppy named Baby that became her loving companion. Over the years Jessica gave her 2 great-grandchildren, Levi Brennan Rucker and Elayna Rose Palmer. Jenifer gave her 1 great-grandchild, Barrett Riley Morgan, and later married his dad, Ricky Morgan. Ricky had 4 previous daughters that also joined the family, Lacey Jade, Naudia Brea, Kadence Brook, and Lillian Destani. Jonathan married Brandi (Flinn) Nix and gave her 2 more great-grandchildren, Wyatt Lee Nix and Madox Gene Nix. She was surrounded by love and when she retired, she stayed home to be the full-time caregiver of Barrett, Jenifer's son. Time passed and her darling dog Baby died May 2019. She began to need more care herself and continued living with Jenifer's family, ultimately being placed on hospice care after several bad falls caused multiple strokes and then a major heart attack. She was preceded in death by her parents, Robert and Elsie Mae Patton; her sister, Joy Wilson; her 2 brothers, Larry Patton and Gerry Patton; and of course her husband Vernon. She was survived by 2 sister-in-laws and their families, Lula Mae Patton and Alice Patton of Skiatook; her son Terry; and all the grandchildren and great-grandchildren mentioned above. Although she is gone from our sight she will never be gone from our hearts.

The family of Barbara Catherine Nix created this Life Tributes page to make it easy to share your memories.

Send flowers to the Nix family.