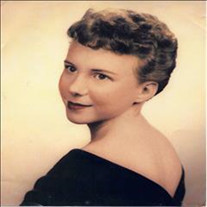 Barbara Ann (Reynolds) Smith was born on November 21, 1941 to Duke L. Reynolds and Dorothy B. (Fike) Reynolds in Tulsa, Oklahoma. As a child Barbara was "queen of the elementary", served on the student council for six years, was in Girl Scouts, choir, and Dude's Cheering Squad. Outside of school Barbara babysat, worked at National State Bank and Peoples State Bank. While at People's State Bank Barbara met Bill Smith. Then in 1964 she and Bill married and were together for 53 years. Barbara was a devoted Christian and gave most of her free time to the church. She taught Sunday school for over 50 years, member of WMU, taught training union and VBS and sang in the choir. Summers were a busy time for Barbara, not only would be a huge part of summer camp by driving the church bus, cooking and sponsoring the youth, she would also host children from the Baptist Children's Home for the summer. She also was a chairperson for Camp Fire Girls. Barbara assisted Porter Consolidated Schools with starting their Special Education program. She volunteered and became a teachers aid in the Special Education department for Broken Arrow Public Schools. She also home schooled one of her grandsons. She loved working with the students so much that Barbara went back and substituted for two years with children from pre-kindergarten through fifth grade for Broken Arrow as well. Barbara also found time to work at Eastwood Baptist Church, Sears and Dillard's through the years. Barbara was preceded by her parents, Duke and Dorothy and her sister, Constance Sue "Connie". She is survived by her former husband, Bill Smith; sons, Billy Smith II (Edith), Brock Smith, and Brett Smith; daughter, Barbana Smith; grandchildren, Blake Hettick, Levi Hettick, Tiara Smith-Jarman, Bryce Smith, Josiah Smith, Zachariah Smith, Paulina Smith, Alexis Smith, Pandorha Smith, Ocean Smith, and Xena Smith; great-grandchildren, Annistyn Jarman and Bellamy Jarman; and brother, Duke. Viewing is 10am-1pm, Friday, September 3, 2021 at Moore's Southlawn Chapel with Funeral Services following at 2pm at Memorial Park Cemetery's Chapel.

Barbara Ann (Reynolds) Smith was born on November 21, 1941 to Duke L. Reynolds and Dorothy B. (Fike) Reynolds in Tulsa, Oklahoma. As a child Barbara was "queen of the elementary", served on the student council for six years, was in Girl Scouts,... View Obituary & Service Information

The family of Barbara Ann Smith created this Life Tributes page to make it easy to share your memories.