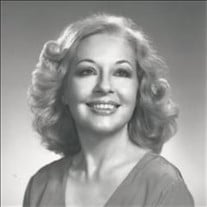 Barbara Jean Thomas was born March 19, 1925 in Coffeyville, Kansas, to parents Alta V. and Clarence Dial. She grew up in Coffeyville and attended Kansas State University, where she earned a Bachelor of Science degree in Chemistry. Coffeyville's Army Air Force Training Base facilitated her meeting pilot-in-training Kenneth W. Thomas, whom she married in 1947. Following a cross-country honeymoon trip, they lived in Ames, Iowa, where Barbara taught college chemistry while her husband obtained a Mechanical Engineering degree. The couple subsequently moved to Detroit, then Illinois, and settled in Tulsa in 1962 where the weather is kinder. Barbara was ahead of her time. While rearing her three children, she rejected titles such as homemaker and housewife. She applied her schooling to nutrition, and it must have worked. She pursued her interests in vocal music and volunteer work including politics and charities, and practiced yoga in the 1960s, well before its current popularity. She participated in various vocal music recitals and local theater productions, including Tulsa Little Theater and The Drunkard at the Spotlight Theater. She obtained a Masters degree in Radio, Television and Film Broadcasting and Production from the University of Tulsa. She also pursued lighting design and provided volunteer reading services for the blind and visually disabled. Throughout life, her pleasures were travel, music (classical, big band, opera, Latin rhythms), and reading about other cultures of the world. Later in life she authored four mystery/adventure novels. She was fastidious in tending to her yard work and her roses. She is survived by her brother Ronald A. Dial, and her children Dwight Thomas, Sidney Cabbiness, and Chris Goetz; 5 grandchildren and 6 great-grandchildren. Memorial Service will be 2:00 P.M., Monday, April 4, 2022 at Moore's Southlawn Chapel, 9350 E. 51st, Tulsa, OK. Moore's Southlawn 918-663-2233

Barbara Jean Thomas was born March 19, 1925 in Coffeyville, Kansas, to parents Alta V. and Clarence Dial. She grew up in Coffeyville and attended Kansas State University, where she earned a Bachelor of Science degree in Chemistry. Coffeyville's... View Obituary & Service Information

The family of Barbara J. Thomas created this Life Tributes page to make it easy to share your memories.