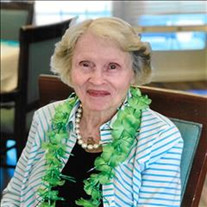 Bernice May Huggins, 103, was born on August 4, 1918 to Joe and Tena May in Little Rock, AR, and died on October 14, 2021 in Tulsa. While still in her teen years, she met and later married Olaf Huggins. It was a loving marriage that would last 67 years until his death on June 19, 2000. Through hard work, a tenacious spirit and deep faith in God, together they rose from humble beginnings to build a life that exemplified the American Dream. The newlyweds moved to Tulsa where Olaf worked in a grocery store that would later become Warehouse Market. During World War Il, Bernice stayed home with their young children, Charles and Barbara, while Olaf worked at the Douglas Bomber Plant. After the war, the couple welcomed their third child, Michael. At this time Olaf moved into the lumber and homebuilding business, creating Huggins Material Supply Co. Bernice attended night school taking accounting and bookkeeping courses. She and Olaf worked side by side as they built many fine homes in Tulsa. She also served as President of the Tulsa Chapter of the National Lumber Women's Association. Later, the couple would expand their business interests to include banking and were early investors in First Bank of Owasso where Olaf served on the Board of Directors for many years. As longtime members of Boston Avenue Methodist Church, Olaf and Bernice were actively involved in the Friendly Couples Sunday School Class. Noted for her hospitality, Bernice was a gracious hostess and was known for her holiday dinners that were festive events enjoyed by family and friends. Following Olaf's death, Bernice began attending First United Methodist Church with her son and daughter-in-law, Mike and Jane Huggins, where she became a dearly loved member of the Builders Sunday School Class. She was preceded in death by her parents, and her sisters, Polly, Louise and Marguerite. She is survived by son, Charles Huggins (Nelda) of Edmond, OK; daughter, Barbara McCutchen (Joe) of Ft. Smith, AR; son, Mike Huggins (Jane) of Tulsa; granddaughter, Melanie Griffith (Bryan) of Prosper, TX.; grandson, Jonathan Huggins (Mindi) of Leesburg, VA. She is also survived by great-grandchildren, Abby and Rachel Griffith; Hudson and Hayden Huggins. The family would like to express their gratitude to the staff of the Villa and the Chateau at Montereau for the loving care they have provided to Bernice during her years as a resident. Also, they would like to extend a special word of thanks to St. Francis Hospice. A private family burial is planned. Moores Southlawn 918-663-2233 share memories at www.moorefuneral.com

Bernice May Huggins, 103, was born on August 4, 1918 to Joe and Tena May in Little Rock, AR, and died on October 14, 2021 in Tulsa. While still in her teen years, she met and later married Olaf Huggins. It was a loving marriage that would last... View Obituary & Service Information

The family of Bernice May Huggins created this Life Tributes page to make it easy to share your memories.

Send flowers to the Huggins family.