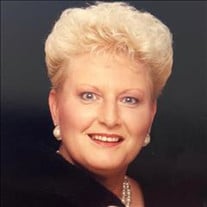 Betty Louise Monteith was born on December 25, 1939, to Alfred Whitlow and Tressa Mustion. She was their only child. She was born in Belton, Missouri. As a child, her parents ran a movie theater where she spent a lot of her time. After graduation she and her parents moved to Tulsa to be closer to family. Her family ran the Jitney Jungle grocery store and she worked there while attending nursing school. It was there she met her husband, Gene. Gene and Betty were married September 15, 1961. Their son Mark was born and died on August 22, 1963. Two years later they had their first daughter Michelle on April 15, 1965. Three years later they had their second daughter Melanie on February 7, 1968. In 1960 Betty began her 40-year nursing career. As a seasoned nurse she experienced multiple facets of nursing but ended up finding her niche in the newborn nursery. During her nursing career she made many friends along the way and was consulted by family for nursing advice. She retired in 2001 to be a full-time grandma. In her free time, she loved watching her grandkids during their various activities. She spent many hours on road trips to support her children and grandchildren during sporting events. She had a competitive nature and could always be heard on the sidelines. She also enjoyed gardening and tending her koi pond. Over the years Betty had many animals but towards the end her cats received the remainder of her attention. She is survived by her daughter Michelle and husband Randy Gordon of Sapulpa; her daughter Melanie Monteith of Beggs, Oklahoma; her grandchildren Ashley Gordon of Sapulpa, Kelsey and husband Kemper Hearon of Edmond, Linsey Gordon of Sapulpa, and Ellie Monteith of Beggs Oklahoma. Her brother-in-law Gary and wife Maggie Monteith of King, North Carolina; niece Emily Monteith of King, North Carolina; nephew William Monteith of San Francisco, California. She is preceded in death by her parents Whit and Tressa Mustion, husband Kenneth Gene Monteith and son Mark Monteith. Memorial Service will be 10AM, Friday, January 14 at Moore's Southlawn Chapel, 9350 East 51st Street, Tulsa, Oklahoma. Moore's Southlawn Chapel 918-663-2233

Betty Louise Monteith was born on December 25, 1939, to Alfred Whitlow and Tressa Mustion. She was their only child. She was born in Belton, Missouri. As a child, her parents ran a movie theater where she spent a lot of her time. After graduation... View Obituary & Service Information

The family of Betty Louise Monteith created this Life Tributes page to make it easy to share your memories.

Send flowers to the Monteith family.