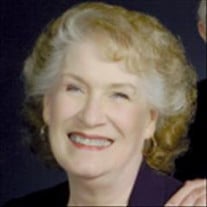 Betty Jo Vogel passed away on August 13, 2021 in Tulsa, OK at age 85. She will be remembered and deeply missed. She was born on February 05, 1936 in Tulsa to John Garrett Brown and Lovee Arvilla (Ragan) Brown. She attended Tulsa schools at Kendall Grade School, Wilson Jr. High, and Central High School graduating in 1954. She then attended Oklahome State University, Oklahoma Baptist University, and The University of Tulsa, majoring in music. She met John Vogel at The University of Tulsa and they were married in May, 1959 at her home church, Immanuel Baptist Church, Tulsa. She and John moved to Kimball, NE in 1961 because of his work in the oil fields. Then back to Tulsa for the rest of her life where they made many friends with Amoco Research people and Asbury people. To this union was born John Robert (Bob) Vogel, Kathryn Jo Vogel, and Roger Alan Vogel. She was very supportive of the childrens musical and artistic activities while they were growing up and she played the piano for several childrens choirs. Betty Jo was a wonderful mother, great lady, and an inspiration to many others with her playfulness, sense of humor, indomitable, kind, sweet spirit, loving protectiveness, sacrificing, and homemaker-caretaker role. She suffered a stroke in January, 1996 but recovered to walk with only the aid of a cane. She than visited several rehab groups to show that improvement after a stroke is possible. Later, she joined Asbury United Methodist Church and sang in the Chancel Choir for several years. This was the highlight of her life, singing under Hart and Marty Morris, enjoying the organ played by Rosie Corrales, and laughing at the jokes of Pastor Tom Harrison. She suffered another stroke in April, 2015. She had hospitalization and rehab but she never fully recovered. Other problems required another hospitalization in July, 2021 until her death. She was preceeded in death by her parents and brother, Garrett Brown (Houston, TX). She is survived by her husband John and children, John Robert (Bob) Vogel (wife Sonya Kuo) (New York City), Kathryn Jo Vogel (Tulsa), Roger Alan Vogel (Tulsa), grandson Andrej Vogel (New York City), Garrett's wife Jannene Brown (Houston, TX), nieces Brenda Featherston (Mexia, TX), Carole Todd (Houston, TX), Deborah Meraz (Lawton, OK), Jennifer Benning (Edmond, OK), and their spouses and children. Also cousins Nancy (Ragan) Hoard (Bixby, OK), Susie (Ragan) Walters (OKC area), and Richard Ragan (Enid, OK). The family is grateful for the wonderful care from her primary care doctors Edward L. Taylor MD and Insung Kim MD, and Hospitalist Jonathan Levine MD. Also for the nurses from the Saint Francis Health System and the PAM Speciality Hospital. Memorial Service to be on Tuesday, Oct 26, 2021 at 2:00 pm in Mason Chapel, Asbury United Methodist Church, 6767 S Mingo Rd, Tulsa. Facial masks inside. No reception. In lieu of flowers, please make a gift to the Music Department, Asbury Church, 6767 S. Mingo Rd, Tulsa, OK 74133 or your favorite charity. Moore Funeral Home - Southlawn Chapel 918-663-2233

Betty Jo Vogel passed away on August 13, 2021 in Tulsa, OK at age 85. She will be remembered and deeply missed. She was born on February 05, 1936 in Tulsa to John Garrett Brown and Lovee Arvilla (Ragan) Brown. She attended Tulsa schools... View Obituary & Service Information

The family of Betty Jo Vogel created this Life Tributes page to make it easy to share your memories.

Send flowers to the Vogel family.