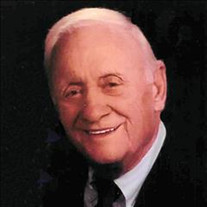 Bob L. (Bobby Lee) Stice passed away on October 4, 2021 in Tulsa, Oklahoma. He was born March 12, 1930 to Harry Stice and Florence (Wells) Stice and grew up in Picher, OK. Before Bob finished high school, he enlisted in the US Army where he completed his GED and some college. Bob was a two time veteran of the US Army, pre and during the Korean Conflict. When stationed at Ft. Chaffee, AR, he met and married the love of his life, Iva Raye Stice. After his second discharge, Bob moved his young family to Tulsa where he began his working career driving a delivery truck for Bama Pie. Bob and Raye also found a church home and became life-long members of Sheridan Road Baptist Church (now Turning Point Church) when it was in it's mere infancy and holding services in a tent at Pine and Sheridan. His unwavering faith was extremely important to him his entire life. Shortly after relocating to Tulsa and starting his career at Bama Pie, Bob realized he needed money and not pies to support his family. His job search led him to McDonnell Douglas Aircraft Corp., from which he retired after a 40 year career. After retirement, he and Raye traveled the world and had multiple adventures. His favorite trip was two weeks in Europe which Raye almost hated (she was afraid to fly over water) but she got over it. Bob spent his retirement years doing "Raye" projects around the house and catering to her every whim, visiting family members on both coasts, traveling to Branson, MO multiple times per year, trout fishing with his best friend in life Harold Wells, hunting/fishing and any other craziness his sons involved him in, and spoiling his granddaughters and great-grandchildren at every opportunity. Preceded in death by his parents, Harry and Florence Stice, siblings Pearl Stice, Claude Stice, Jack Stice, Louise Trudgeon, and Billie Deshazer, and his beloved son, David Brent Stice. Bob is survived by his wife of 72 years Iva Raye Stice, his son, Stephen Courtney Stice and his better half Tracy Brantley, his three granddaughters, sons-in-law, daughter-in-law, and his great-grandchildren: Amy and Stephen Herring and their two sons Hunter and Brody Herring, Betsy Orbeck and her spouse Dee Orbeck, Meagan and Russell Blair and their two daughters Lauren and Madeline Blair. Bob will be greatly missed by his family, his friends, and his neighbors. He was loved by many. His kindness and gentle spirit were an inspiration and a guiding light to us all. RIP Bobby Lee Stice Viewing will be 10AM-8PM. Sunday, October 10, 2021 with family greeting friends from 1-3PM, both at Moore's Southlawn, 9350 E. 51st, Tulsa, OK. Funeral service will be 2:00 P.M., Monday, October 11, 2021 at Moore's Southlawn Chapel, Tulsa. Moore's Southlawn 918-663-2233

Bob L. (Bobby Lee) Stice passed away on October 4, 2021 in Tulsa, Oklahoma. He was born March 12, 1930 to Harry Stice and Florence (Wells) Stice and grew up in Picher, OK. Before Bob finished high school, he enlisted in the US Army where he... View Obituary & Service Information

The family of Bob L. Stice created this Life Tributes page to make it easy to share your memories.

Send flowers to the Stice family.