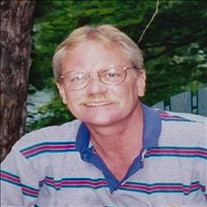 Brian Kent Middleton, 70, of Tulsa, passed away on January 29, 2022. He was born in Oklahoma City and raised primarily in Norman, OK. His father, mother and sisters were talented musicians and he was an accomplished French horn player. He was a 1969 graduate of Memorial High School and attended Tulsa University and Oklahoma University. He had a meticulous and creative nature which lent well to a career in the trophy and awards business. He worked for Creative Awards in Tulsa for over 40 years. He was married to Donna Middleton on December 8, 1973 in a double wedding ceremony with her sister, Jan, and husband, Charley. They raised their children, Renee and Kent, in Verdigris, OK, where they resided for over 30 years. He was a devoted husband and father, dedicated to supporting his wife and children in their activities and passions. His hobbies included gardening, woodworking, watching OU football and spending time with his family and friends at Grand Lake. He had a calming presence and a gentle nature. He was known to all who loved him as a kind man who took a "laid back" approach to life. He enjoyed the simple joys of life such as a night at home with family and a good steak on the grill. He will be greatly missed and we will cherish his memory forever. He is survived by his wife of 48 years, Donna Middleton, and daughter Renee Rust and family, Corby, Madi and Clay; daughter-in-law, Morgan Middleton and sons, Hank and Del; sister Stephanie Watson and husband, Gary; sister Christine Worsham and family, Steve, Benjamin and Katie; sister Julie Gibson and family Bill, Xander and Lainey; sister-in-law Jan Deatherage and family Charley, Brent and Michelle; brother-in-law Chris Nielsen and family, Joyce, Jeff, Bree and Roland; brother-in-law John Nielsen and family, Karen, Emily, Riley and Hayley. He is preceded in death by his father, James; mother, Doris; son, Kent and special friend, Reba VanDonge. In lieu of flowers, contributions may be made to the Alzheimer's Association. Memorial service will be 1:00 P.M., Sunday, February 6, 2022 at Moore's Southlawn Chapel, 9350 E. 51st, Tulsa, OK. Moore's Southlawn 918-663-2233

Brian Kent Middleton, 70, of Tulsa, passed away on January 29, 2022. He was born in Oklahoma City and raised primarily in Norman, OK. His father, mother and sisters were talented musicians and he was an accomplished French horn player. He was... View Obituary & Service Information

The family of Brian Middleton created this Life Tributes page to make it easy to share your memories.

Send flowers to the Middleton family.