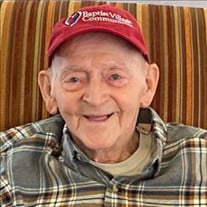 Buyrl Alexander Franks, age 96, long time Tulsa resident, passed away peacefully, surrounded by his family, December 10, 2021. A devoted husband to Anna Belle (Hales), father to daughters Lea Anne Holmes, husband Tim of Portland, OR and Janice Coates, husband Bill of Broken Arrow, OK. Grandfather (Dan Dan) to Dustin Sharp, Tony Holmes and Kelsey Kauffman. Great-grandfather, uncle and loyal decades long close friend. He is preceded in death by wife Anna Belle (Hale) Franks; parents: John and Ruth (Dale) Franks, brothers: Claude and Lonnie Franks. Sisters: Daisy Kisling, Ruth Lee-Johnson, Lyla Shewmake. He is survived by sister Patty Judd (Granby, MO). Buyrl was the youngest son born March 23, 1925 to John and Ruth Franks, Newton County, MO. Growing up on the family farm during the "Great Depression", he had the inclination and curiosity to think outside the box disassembling and reassembling toys and later repairing broken farm equipment. After graduating from Granby High School, Missouri, 1943, he volunteered for the US Navy in November 1943 to April 1946, serving as Signalman 3rd Class, SV6 aboard the USS LST 739 in the Pacific Theater. He was awarded the Purple Heart for wounds sustained in combat during the Battle of Leyte Gulf, Philippines and witnessed firsthand the battles of Iwo Jima and Okinawa during the last year of World War II. Following the surrender of Japan in August 1945, the USS LST 739 transported needed supplies to war torn Japan. There he eye-witnessed the destruction of the Atomic bomb at Hiroshima. Upon his Honorable Discharge from the Navy, Buyrl moved to Tulsa, OK where with a mistaken identity, and "a slap on the butt from the girl next door", Buyrl met the love of his life, Anna Belle Hales. They were married in 1947 and devoted to each other for 72 years. Using the GI Bill, Buyrl attended college and graduated with a BS degree in Mechanical Engineering from Oklahoma A&M University. He worked for numerous companies, including North American Rockwell, Texas Instruments and Lowrance Electronics. Buyrl was part of the engineering team that helped design the "Lunar Excursion Module" on the Apollo space flight to the moon July, 1969. Retiring in 1988, he began a second career and passion - Woodcarving. He joined the Eastern Oklahoma Woodcarvers Association, participating in local carving shows, teaching wood carving classes at Tulsa Tech, Woodcrafts and summer classes at Doane University, Nebraska. He has many carvings in private homes and businesses in the Tulsa area. One of his public woodcarvings is the 14 Stations of the Cross displayed at St. John's Episcopal Church in Tulsa. Buyrl had a wide range of interest and hobbies outside of work and woodcarving. A member of the Society of Mechanical Engineers. Square Dancing with wife Ann as members of the Bucaroos and Tulstars in the 1960's. Entering fishing tournaments with friend Duane Treat and serving in his home church Forest Park Christian Church. Much can be said to describe the man from Granby, MO who deeply touched our lives. Son, Brother, Warrior, Friend, Husband, Dad, Dan Dan, Woodcarver. Even through the fog of dementia, his last words spoken were with a "smile and a thank you". The most endearing word to describe Buyrl Franks - KINDNESS! Visitation is Wednesday, December 15, 1-2 pm followed by funeral service 2 pm, Memorial Park Cemetery Chapel 5111 S. Memorial Drive, Tulsa. Moore's Southlawn 918-663-2233

The family of Buyrl Alexander Franks created this Life Tributes page to make it easy to share your memories.

Send flowers to the Franks family.