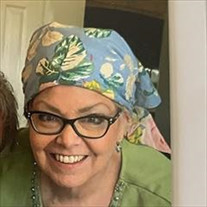 Catherine "Cathy" Sue Izzo, nee Izzo (no relation), 67, of Broken Arrow, OK, died April 24, 2022, at home and surrounded by the love of her husband Joseph and children Anthony and Laura. Cathy was the beloved sister and sister-in-law of Tom, Jim (Joan), John (Rosemary), Pat (Judy), Kevin (Joan), Ermine, Dave (Liz), and Stephen (Melisa), as well as a cherished or outright favorite cousin and aunt to many. She was preceded in death by her parents, Bernard and Jean. Born and raised in Elmhurst, IL, Cathy became interested in travel at a young age and began studying abroad as a teenager, including stints in Colombia, Morocco, and the Universite de Dijon in France. In 1976, she became the fourth generation of her family to graduate from Heidelberg University, and the third to meet her eventual spouse there - she and Joseph, also named Izzo but no relation as far back as anybody could trace, were married in 1981. Cathy maintained her international interests through work for the Moroccan government and the French Banque Paribas in Chicago, and she and Joseph shared a love of exploring new places, languages, and cultures with their children. The family spent several years living in Limerick, Ireland, after having moved to greater Tulsa in 1994. In recent years, Cathy became a proud member of the Alliance Francaise and the Swiss Club of Oklahoma, and the Sister City Program Coordinator and Administrator for the Tulsa Global Alliance. Rosary to be held at 4:30pm Monday, May 2nd at St. Anne's in Broken Arrow 301 S 9th St, Broken Arrow, OK 74012 , followed by visitation from 5-7pm. Mass to be held at St Anne's on Tuesday, May 3rd at 11am. Flowers (especially yellow roses) and memorials to Tulsa Global Alliance are deeply appreciated. More information at https://cathy.izzo.one/ Under the direction of Moore's Southlawn 918-663-2233

Catherine "Cathy" Sue Izzo, nee Izzo (no relation), 67, of Broken Arrow, OK, died April 24, 2022, at home and surrounded by the love of her husband Joseph and children Anthony and Laura. Cathy was the beloved sister and sister-in-law of Tom,... View Obituary & Service Information

The family of Catherine S. Izzo created this Life Tributes page to make it easy to share your memories.

Send flowers to the Izzo family.