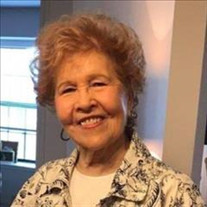 Clara June (Henson) Geiger passed away on December 9, 2021 at the age of 91. She was born to Ernest and Effie (Cox) Henson on January 21, 1930 in Hinton, OK during what was the coldest January of the 20th century in Oklahoma. Clara was one of nine children-four boys and five girls-the middle girl of the five sisters, and the frequent confidant of all her siblings throughout their growing up years in Hinton and Tulsa, where they moved when Clara was a teenager. She graduated from Daniel Webster High School in West Tulsa in 1948, and kept up many of her Webster friendships throughout adulthood by attending reunions and regular lunches with classmates well into her golden years. She attended church throughout her adult life and was an active member of Carbondale Bible Church, Covenant Bible Church, and Grace Bible Church, respectively through the years. She married and raised four children, did volunteer work, sang alto in the church choir, was a crackerjack bowler, and took care of a host of family members and loved ones. Clara's dry wit and a warm smile made her approachable, and she often found herself willingly listening to someone's life story, whether she was standing in the grocery store line, picking up the dry cleaning, or having lunch in the cafeteria of the independent living community where she resided the past five years. She was a great listener, and an excellent judge of character, and she rarely forgot a name or a person's story. Clara was preceded in death by her parents, husband, Richard L. Geiger, and grandson, Matthew Smith. She is survived by her four children and their spouses: Mark & Lisa Brewer of Jenks, and Connie & Rex Smith, Kirk & Deleise Brewer, and Greg & Debbie Geiger all of Tulsa; nine grandchildren, five great grandchildren, and many nieces and nephews. She will be greatly missed by all who knew and loved her. A Private Family Service will be held. Moore's Southlawn 918-663-2233

Clara June (Henson) Geiger passed away on December 9, 2021 at the age of 91. She was born to Ernest and Effie (Cox) Henson on January 21, 1930 in Hinton, OK during what was the coldest January of the 20th century in Oklahoma. Clara was one... View Obituary & Service Information

The family of Clara H. Geiger created this Life Tributes page to make it easy to share your memories.

Send flowers to the Geiger family.