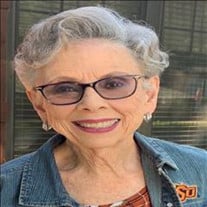 If love alone could've kept you from slipping away, you would have remained on this earth forever and a day, But God needed a woman who was loving, brave and tender, so he took you by the hand and led you to Heaven's wondrous splendor. Constance X. Brown (Campbell) or Connie as most people knew her as, gained her angel wings on July 4th, 2021. This incredible example of a wife, mother, grandmother and sister was born in Oklahoma City, Oklahoma, March 6, 1939 to Xerma Rice and Polly Dorys Campbell. Connie was proud of her middle initial X and would tell all that she would meet that Constance Xerma Campbell was a long name to learn to write in kindergarten. Connie grew up around family in Oklahoma City, Seminole, Tulsa and Wewoka, Oklahoma. She spent many days on her grandparent's farm in Seminole Ok and loved to tell stories about her adventures there. Connie graduated from John Marshal High School in Oklahoma City in 1957 and lacked one semester from graduating from Oklahoma University. She instead chose to marry her high school sweetheart, Paul E. Brown II on January 27, 1961 and moved to Stillwater with him so that he could finish college at Oklahoma State University. Paul converted Connie to be a loyal OSU Cowboy fan and together they attended more than 50 years of sports activities in Stillwater, until his passing a week following their 56th wedding anniversary on February 2, 2017. Connie met her forever love Paul while they were in high school. Paul said he saw Connie first when she walked into the high school cafeteria, but Connie's story has always been that their first date was because of her. Paul was incredibly shy, so Connie asked him to the Sadie Hawkins dance in high school, which is where the girls ask the boys out, and the rest is history. Connie was a loyal wife and followed Paul to more than 17 locations during his career with Conoco Pipeline. She would often leave moving boxes packed up from the previous move, waiting for the call that they had been transferred again to a new state or town. No matter where the new place was, Connie always made each house a wonderful home. Connie adored her family and was the world's biggest animal lover. She rescued everything from caterpillars to opossums and would often pull the car over to pick up injured or stray animals, never once considering the dangers of the roadway. Connie always had a house full of animals and she treated each one with love and respect: even the snake that she rescued that had 115 babies in her bathroom. Connie was the most kind-hearted woman around, but she was also a fighter and beat Covid-19 in November 2020. She additionally survived triple negative breast cancer, along with her husband Paul, who had male breast cancer. During Paul and Connie's breast cancer battles, they became very active with the Komen Race for The Cure group in Tulsa. Connie and Paul retired in 1994 and made their final home in Tulsa, OK. They wanted to live closer to their children and grandchildren. Connie was preceded in death by her parents Xerma and Polly Campbell and her sister Sylvia Wicker. Survivors include her loving daughter and son-in-law Teresa and Mark Cochran and grandchildren Troy and Kyndall, loving son and daughter-in-law Kevin and Jennifer Brown and grandchildren Grayson, Michal, Campbell and Bennett, brother in-law Dr. Leslie C. Brown and wife, Joyce Brown and their children Brian and Stacy, Niece Mary Stover and grandnieces Hayley and Holley and Cousins Roger and Lisa Mills. Visitation will be at Moore's Funeral Home, 9350 E. 51st St, Tulsa, Wednesday, July 14, 2021 from 5-7 pm. Service will be at Christ United Methodist Church, 3515 S. Harvard Ave., Tulsa, Thursday, July 15, 2021 at 11 am. A graveside service will take place at Memorial Park Cemetery, 13313 N. Kelley Ave., Oklahoma City, OK, Friday, July 16 at 12 pm. Moore's Southlawn 918-663-2233

If love alone could've kept you from slipping away, you would have remained on this earth forever and a day, But God needed a woman who was loving, brave and tender, so he took you by the hand and led you to Heaven's wondrous splendor. Constance... View Obituary & Service Information

The family of Constance Xerma Brown created this Life Tributes page to make it easy to share your memories.

If love alone could&#39;ve kept you from slipping away, you would...

Send flowers to the Brown family.