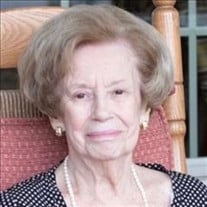 Corinne Walton Lewis passed away on September 17, 2021. She was born in New York City, N.Y. on November 28, 1925 to Leslie Hall and Frances Pope Hemeter. She was raised in Pittsburg, PA from the age of three and graduated in 1947 with a five year nursing degree from the University of Pittsburg. She married Richard A. Walton in 1947 and they moved to Tulsa, OK in 1953. She was a member of Southminster, Kirk of the Hills and First Presbyterian Churches. She was a junior board member of the Women's Association and a volunteer at the Tulsa Psychiatric Center, The Tulsa Boys Home and Children's Medical Center. She was a member of the Mental Health Association of Tulsa and served on the board of directors of Nursing Service, Inc., Tulsa Opera, and Tulsa Psychiatric Center. She was a member of Southern Hills Country Club. Corinne conceived and helped implement the first psychiatric nursing study program in the United States which had a rotation study and practice segment in a comprehensive community mental health center. She conceived and implemented a death and dying program for studies in caregiving to the terminally ill. She earned her Master of Social Work from the University of Oklahoma in 1978 and later served as an adjunct professor at the University of Oklahoma College of Medicine. She was in private practice as a psychotherapist from 1978 to 2002. In 1999 she married C. S. Lewis, Jr., M.D. They traveled to Europe, Africa and Asia to work with medical education exchange projects of The International Studies in Medicine programs of the University of Oklahoma College of Medicine with medical missions of the Presbyterian Church. Dr. Lewis predeceased her in 2001. She was also predeceased by her parents, her sister and brother-in-law, SaraLee and Robert Miller, and her son-in-law, Jim Hewgley, III. She is survived by her three children, Anne M. Hewgley - Tulsa, OK, Dr. Richard A. Walton, Jr. (Sherilyn) - Tulsa, OK, Timothy H. Walton (Janice) - Tulsa, OK; six grandchildren, Aaron A. Walton - Tulsa, OK, Kara Walton Rose (Matt) - Tulsa, OK, Andrew B. Walton - Bellingham, WA, Nicholas H. Walton - Fayetteville, AR, Tucker H. Walton - Bellingham, WA and Tori A. Stout (Kyler) - Tulsa, OK; and one great-granddaughter, Emra Rose. She is also survived by Dr. Lewis' children, Sally Lorenz - Madison, WI, Carol Kast (Barry) - Portland, OR, and C. S. ("Budge") Lewis, III (Mary) - Tulsa, and their families. A private graveside service for Corinne will be held at Memorial Park Cemetery, Tulsa, OK. In lieu of flowers the family asks that you donate to the Mental Health Association Oklahoma in Tulsa, OK or your favorite charity, in Corinne's memory.

Corinne Walton Lewis passed away on September 17, 2021. She was born in New York City, N.Y. on November 28, 1925 to Leslie Hall and Frances Pope Hemeter. She was raised in Pittsburg, PA from the age of three and graduated in 1947 with a five... View Obituary & Service Information

The family of Corinne Walton Lewis created this Life Tributes page to make it easy to share your memories.

Send flowers to the Lewis family.