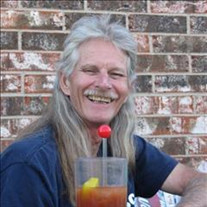 Danny Joe Bennett came into this world on July 3, 1952 in Tulsa, OK. He passed at his home in Tulsa on Monday, August 23, 2021 at the age of 69 years. Danny attended Burbank Elementary, Bell Jr. High, and Will Rogers High School. He played baseball for the Burbank Polecats. In Junior High he saved up his money and bought a Schwinn Sting Ray Bike. It was Metallic Blue with a white banana seat. He could be seen everywhere on it. He purchased his first car while still in school. It was a two-door 63-64 Red Chevy Nova in mint condition. Had it about a week and totaled it on Halloween. He also had a blue chevy truck that had an automatic toilet paper dispenser. He went through numerous vehicles after that. In 1981, he totaled his first Camero by trying to take out a tree. He married the love of his life, Sharon Lee Wright on August 7, 1971. On December 18, 1980, they had a beautiful daughter, Danelle Lee. He worked as a machinist alot of years at Flint Steel while still in high school. He worked several years at North American Carbide, and became a CNC machinist. He worked a short time at Ajax. He retired while he was a da-Pro. He lost Sharon on September 30, 1986. He went through a very dark period then. He spent time in a Drug & Alcohol Rehab and used the experience to help others. Then on May 17, 1994 he met Kristel Welcome. They spent most of their time camping, fishing, and attending music fests. Music was a great part of Danny, and in July, 2007 he and Kris attended the very first Rocklahoma in Pryor, OK. They attended Mayfest, Octoberfest, Bluesfest, and Rentisville Bluesfest every year. Kris proposed to him on July 4, 2004 and he accepted. His daughter, Danelle married Darin Cousens on June 8, 2002. On January 7, 2009, they gave Danny his first and only grandchild, Dylan Lee. Preceded by his wife, Sharon Lee Wright Bennett; parents, Jane Evelyn Reese Bennett & Rex Arthur Bennett; one niece, Mary Elizabeth Grummer; one nephew, Richard Alan Henson, Jr. Survived by daughter, Danelle Lee Cousens and husband, Darin Cousens; grandson, Dylan Lee Cousens; sisters, Janice Sue Horton and Patricia Evelyn Wyers; nieces and nephews, Gadge Ware-Grummer, Margaret Goodman, Brian Nokes, Stephen and Jennifer Grummer, Chance Grummer, Jonathan Grummer, Bella Ibara, Emi Perez, Eli Grummer, Jason and Misty Henson, McKayla, Jazmine and Jayda Henson, Mackenzie Garrison, Kage Henson and Kage's siblings; Fiance', Kristel Welcom and sons, Timothy Glowczewski, Carl and Dawn Glowczewski, Michael and Kim Glowczewski; nieces and nephews, Ashley, Alyssa, Angela and Cameron, Jarica, Carri, Madison, Coleten, Michael, Kayden, Damien, Amaila, Belle, and Lucas. Danny's Motto: "If you couldn't get it at Quik Trip, you didn't need it." Viewing will be 10AM-8PM, Thursday, August 26, 2021 at Moore's Southlawn, 9350 E. 51st, Tulsa, OK. Funeral service will be 2:00 P.M., Friday, August 27, 2021 at Memorial Park Cemetery Chapel, 5111 S. Memorial Dr., Tulsa, OK. Moore's Southlawn 918-663-2233

Danny Joe Bennett came into this world on July 3, 1952 in Tulsa, OK. He passed at his home in Tulsa on Monday, August 23, 2021 at the age of 69 years. Danny attended Burbank Elementary, Bell Jr. High, and Will Rogers High School. He played... View Obituary & Service Information

The family of Danny Joe Bennett created this Life Tributes page to make it easy to share your memories.

Send flowers to the Bennett family.