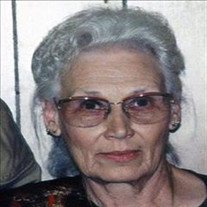 Darla Jean Adams was born on September 15, 1935 to Leland Stanford and Gladys Lee (Haney) Lybarger in Tulsa, Oklahoma. She departed this life on February 15, 2022 at St. Francis Hospital in Tulsa. Darla grew up in Tulsa and graduated from Will Rogers High School in the Class of 1954. She married John Nim Adams, Jr. shortly after graduation. While John served in the U.S. Army, Fort Carson, Colorado, her eldest son John Leland Adams was born in Colorado Springs, Colorado. After John served in the Army, they returned to Tulsa where youngest son, James Ray Adams was born. Darla worked as a bookkeeper and keypunch operator for Sinclair Oil Company. Later she worked for Oklahoma Tire and Supply Company. She volunteered at Andrew Jackson Elementary School in Tulsa serving as PTA president for several terms. She was a Den Leader for Cub Scouts and Webelos in Tulsa. Darla taught Sunday School classes at Sheridan Assembly of God Church and several other churches in Tulsa and Broken Arrow. She served with ladies groups and sung in the choir. She taught youth at Calvary Temple Christian Academy in Broken Arrow. She is a member at Liberty Freewill Baptist Church in Broken Arrow. Darla enjoyed sewing and crocheting. She made a lot of her clothes and clothes for her sons when they were young. She worked with her son John sewing various components for aircraft upholstery in the 1980s. Darla will certainly be missed by her two sons, nieces, nephews, cousins, sister, brother, and her many friends and loved ones. Viewing will be 10AM - 8PM, Monday, February 21, 2022 at Moore's Southlawn Chapel, 9350 East 51st Street, Tulsa, Oklahoma. Funeral Service will be 10AM, Tuesday, February 22, 2022 at Moore's Southlawn Chapel. Moore Funeral Home - Southlawn Chapel 918-663-2233

Darla Jean Adams was born on September 15, 1935 to Leland Stanford and Gladys Lee (Haney) Lybarger in Tulsa, Oklahoma. She departed this life on February 15, 2022 at St. Francis Hospital in Tulsa. Darla grew up in Tulsa and graduated... View Obituary & Service Information

The family of Darla Jean Adams created this Life Tributes page to make it easy to share your memories.

Send flowers to the Adams family.