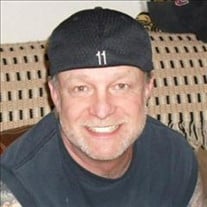 David Paul Forehand, 63, of Tulsa, Oklahoma, passed away unexpectedly on Friday morning March 4th, 2022. He was surrounded by the people who loved and cherished him the most in the world and he was welcomed into the Kingdom of Heaven with open arms by our Lord and savior, Jesus Christ. David was born in Kokomo, Indiana before moving to Arkansas where he lived before eventually coming to Tulsa. David was a graduate of East Central High School in Tulsa, OK, Class of '77. He spoke so fondly of all his memories growing up with his lifelong friends that he met while there and even before. David was a devoted and loving father and husband above all else. He worked professionally as one of the very best electricians in the state and was widely known to handle some of the biggest and most challenging jobs available. However, his true passion in life was being a father and a coach. After no longer being able to coach his son his passion for teaching and helping the youth still called him to continue to devote his time to have a positive impact in this world and he succeeded beyond measure. He touched so many lives as a coach. He spent countless hours at practices and games, and he did all of it with a huge smile on his face, except maybe when he didn't win. There are so many people carrying on the lessons that he taught them, and he will forever be in our hearts helping to guide us as we go along this journey called life. His biggest and most impactful lesson was that of perseverance. He truly believed in and exhibited what it meant to never quit, no matter how difficult something may have become. David was one of the strongest yet somehow sensitive and caring people in the world. His spirit is now free in Heaven to coach Gods team and play golf on the most beautiful golf courses one person could imagine. David is survived by his loving wife Shelley, his son Joshua (Josh Boy), his daughter Melissa (Sissy), his son Jonathan and his grandsons Mason, Ash and Reese and his brothers and sisters Mark, Johnny, Susie, and Barb. We will all feel the pain of this loss for many years to come because there is no replacement for someone so special like David. His spirit will forever live on and his impact on this earth will continue to be manifested in the most positive way. We love and miss you Grandpa Dave more than you could ever know! Please join us for a Celebration of Life Service on Saturday April 2nd at 10:30am at the Stokely Event Center located at 10111 East 45th Pl, Tulsa, OK 74146, to honor and celebrate the life and memory of David Forehand. Moore's Southlawn 918-663-2233

David Paul Forehand, 63, of Tulsa, Oklahoma, passed away unexpectedly on Friday morning March 4th, 2022. He was surrounded by the people who loved and cherished him the most in the world and he was welcomed into the Kingdom of Heaven with open... View Obituary & Service Information

The family of David Paul Forehand created this Life Tributes page to make it easy to share your memories.

Send flowers to the Forehand family.