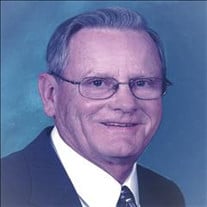 David Leon Luce, or Leon as he was known to his friends and family, was born February 11, 1941 in Oklahoma City, OK. He was the seventh of nine children and the youngest boy. He had four sisters and four brothers. His father passed away when he was two and his mother passed away when he was three, so he and his brothers and sisters were raised at the Charles Page Children's Home. Leon enjoyed hunting, fishing and golf, not necessarily in that order. He loved having coffee with his retirement buddies once a week. He went to every Charles Page High School class reunion, and the Children's Homecomings whenever they had one. Leon never met a stranger and loved talking to people. His friends knew that Leon would always show up for them any time they needed him. He loved his wife and his children, but he especially loved watching his grandchildren in their various activities. He graduated from Charles Page High School in Sand Springs, OK and then from Northeastern State University in Tahlequah, OK, where he met the love of his life. He and Janice married in August of 1962 and have lived in Tulsa their entire married life. He believed in Jesus and attended Eastwood Baptist Church for many years. He received his master's degree in education and retired after 30 years of teaching at Tulsa Public Schools. He taught history, coached football and tennis, and sponsored the Fellowship of Christian Athletes and the Key Club. He passed from this earth on June 2, 2021 peacefully at home. He was preceded in death by his mother and father, Zena and William Luce; two brothers, Bob Luce and Allen Luce and his mother- and father- in-law, Ladeema and Jess Deese. He is survived by his wife of 58 years, Janice Luce; son David Luce and wife Cynthia; daughter Dana Enochs and husband Bob; and son Douglas Luce and wife Leanna; sisters Ella Lindsay, Brooksie Dickerson, Judy Seals, and Wilma DeCoursey and husband Ray; brothers Quell Luce and wife Cleta, and Richard Luce and wife Olga; and sister-in-law Jane Luce; granddaughters, Jacquelyn Tideman, Alex Baker and husband Grant, Riki Cook and husband Jaron, and Kacy Luce; grandsons, C.J. Tideman, Nicholas Brummund and wife Alyson, Zachary Brummund and wife Jenni, Canaan Luce and Levi Luce; five great-grandchildren and multiple nieces, nephews and many friends. Viewing for friends is from 12-6 pm on Sunday at Moore Southlawn Chapel . The family will be present to receive guests Sunday from 4-6 pm. The memorial service will be 1pm on Monday, June 7th at Eastland Baptist Church, 1835 S 129th E Ave, Tulsa, OK 74108. The graveside will be privately for the family.

David Leon Luce, or Leon as he was known to his friends and family, was born February 11, 1941 in Oklahoma City, OK. He was the seventh of nine children and the youngest boy. He had four sisters and four brothers. His father passed away when... View Obituary & Service Information

The family of David Leon Luce created this Life Tributes page to make it easy to share your memories.

David Leon Luce, or Leon as he was known to his friends and family,...

Send flowers to the Luce family.