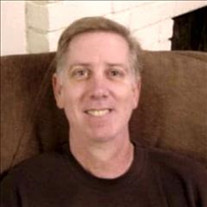 David Paul Olsen was a passionate champion of the underdog. He rocked babies in the hospital, was a Big Brother, and teared up when he watched the "waiting child" segment on the Wednesday night news. He took great joy in walking Sarah and Jennie down the aisle for their weddings. The greatest loves of his life were his grandchildren: Easton (3-1/2) and Westley (16 months) Price, sons of his daughter and son-in-law Jennie and Christopher Price, and Gavin (4) Campbell, son of his daughter of the heart, Sarah Olsen Campbell and Calvin Campbell. While Easton is able to say the letter "O" just fine, for some reason when he combines it with "Papa," it comes out "Papa Ho." Don't judge; David thought it was hilarious. Easton is very comfortable in knowing that Papa Ho is with Jesus. Born to Army serviceman Francis Regis-Clett Olsen of Mobile, Alabama, and wife Theresa Marie Udouj, of Altus, Arkansas, at Bryan, Texas on April 27, 1954, the family moved to Fort Smith and subsequently to Virginia. Living near the edge of the Chesapeake Bay, he and his siblings were avid crabbers, enjoying daily what we in the plains pay a high price for as a luxury food. There's a memory of him visiting family in Pensacola, wading out into the shallow waters, standing still with a look of pure concentration on his face, moving his foot around in the sand, and then bringing up a clam. Upon his father's retirement in 1965, the family returned to Fort Smith, so no more crabs or clams. David earned a Bachelor's degree in Quantitative Analysis and Data Processing (aka computer programming) from the great University of Arkansas, and subsequently moved to Tulsa. He worked 26 years for Williams and later for Laredo Petroleum. He also acquired an MBA from the University of Tulsa. There was something about him sort of like a Venus flytrap. He didn't talk much but was always listening. Strong, silent, like the flytrap. But then, in a flash of an instant, as the flytrap grabs a fly, he would let loose with some hilarious one-liner reaction to the conversation. He was funny as all get-out. His family were card players, and he acquired the love of that. He was extremely intelligent; that, combined with his constant attention to what was going on, meant that he was very aware of the cards played and if a player didn't move quickly enough on their turn, he would certainly "encourage" the player to make their move - now! David came by his personality honestly, some from each parent. While reserved, when he did speak, he spoke truthfully. One could always trust that what he said was from the heart, whether you liked it or not. While he was very conservative financially, he would never decline a request from his loved ones for assistance. He was loving and always tried to be there for those who loved him. Earl Williams, Donna Rogers, David and Charlotte Botteicher, and Gary and Cathy Ford could all attest to his loyalty in their friendships dating back to high school and college. They all brought him joy. His deep belief in a Creator led to a lifelong search for understanding how to live his life so as to please Him. David explored many practices and beliefs, but never wavered in faith. David moved on from his faith search on 3/17/2022 in Tulsa. He was preceded in death by his parents. Surviving are his wife, Karie Stewart Cox Olsen, of Miami, Oklahoma; daughter Jennie Price (Chris); daughters of the heart Sarah Campbell (Calvin) and Kelly Pearce (Donald); grandchildren Easton James Price, Westley Ray Price, and Gavin Paul Campbell; and siblings Pat Olsen, Anne Carman (James), Mike Olsen, James Olsen (Darla), Susan Corona (Moises), Steve Olsen (Gena), and Brian Olsen (Eva), along with a great many beloved nieces and nephews. Viewing is Wednesday, March 23, 2022, 10am to 2pm with Funeral Services following at 2pm both at Moore Funeral Home - Southlawn Chapel.

David Paul Olsen was a passionate champion of the underdog. He rocked babies in the hospital, was a Big Brother, and teared up when he watched the "waiting child" segment on the Wednesday night news. He took great joy in walking Sarah and Jennie... View Obituary & Service Information

The family of David Paul Olsen created this Life Tributes page to make it easy to share your memories.

David Paul Olsen was a passionate champion of the underdog. He...

Send flowers to the Olsen family.