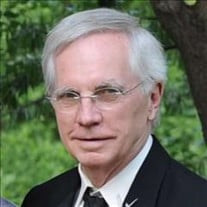 David Earl Sullivan, 74, a devoted husband, father, and grandfather passed peacefully in his home on December 21, 2021, surrounded by his family in Tulsa, OK. David loved the Lord and during his eight-year battle with Parkinson's disease, his faith, strength, and love never wavered. David was born to parents Maple and Berniece Sullivan on September 7, 1947, in Tulsa, OK. He spent his grade school years in Tulsa and Oklahoma City before his father's work in the oil industry moved the family to Wichita, KS where he completed middle and high school. After graduating high school, David served in the Air Force for four years and was stationed in England where he intercepted morse code. He never forgot his morse code ditty-dots and thought it was funny to occasionally converse with his kids in ditty-dot language. After completing his service with the Air Force, he moved back to Tulsa and completed his bachelor's degree at Oklahoma State University in Business Management and spent most of his career as a financial advisor. David met his wife Marilyn at First Baptist Church when they were paired together in a three-legged race at a Sunday School party. They may not have won the race, but they won each other's hearts and married in January 1982. David and Marilyn were devoted members of First Baptist Church where David loved singing in the choir and playing handbells. He also served as a deacon, taught Sunday School, and played on the church softball team. David was an avid sports fan and loved watching The Kansas City Royals and cheering for Oklahoma State athletics. He enjoyed coaching his kids in little league sports and never missed a game or competition as they grew up. He loved to bicycle and participated in FreeWheel, a week-long bicycle ride across the state of Oklahoma for many years with his kids. He loved to travel and countless fond memories were made on road trips to Colorado, Florida, national parks, and many more. David had a great sense of humor, knew a short-cut for every road in America, and always loved a friendly competition. David is survived by his wife Marilyn, brother Tom (Helen) Sullivan, son Patrick (Samantha) Sullivan, daughter Meghan (Evan) Whitefield, daughter Shannon (Stephen) Campbell, daughter Andrea (Charles) Matlock, ten grandchildren, one great-grandchild, and many other loving family members. He was a servant, friend, mentor, and true inspiration to all. A memorial service in celebration of David's life will be held on Tuesday, December 28, 2021, at 2:00 p.m. at First Baptist Church Tulsa. In lieu of flowers, donations can be made to the First Baptist Church Caring Center Ministry at https://tulsafbc.tpsdb.com/Give/one-time. Moore's Southlawn 918-663-2233

David Earl Sullivan, 74, a devoted husband, father, and grandfather passed peacefully in his home on December 21, 2021, surrounded by his family in Tulsa, OK. David loved the Lord and during his eight-year battle with Parkinson's disease, his... View Obituary & Service Information

The family of David Earl Sullivan created this Life Tributes page to make it easy to share your memories.

Send flowers to the Sullivan family.