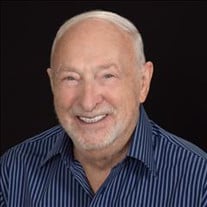 David Price McCoy, "Dave", was born November 6th, 1937 in Marietta, Ohio to Lawrence Edgar McCoy and Eleanor Jane (Price) McCoy. He passed away on May 24th, 2022 in Tulsa, Oklahoma. He was 84 years old. Dave gave his life to Jesus when he was about 12 years old. He was a member of the Bethany Church in Broken Arrow, Oklahoma. David attended St. Mary's, West Virginia, and Marietta, Ohio schools and later attended college. Dave lived with his Aunt Selma and Uncle Carl Core for most of his teen years. His maternal grandparents, his parents, and his Aunt and Uncle Core all lived within two city blocks of one another in Marietta. Dave loved dogs. During his adulthood, he had Bo and later Dora, the beagles; his Labradors, Mac and Val, each with their own personalities and special characteristics. He met famous people like Mickey Rooney and Jackie Gleason, delivered a Western Union telegram to John F. Kennedy's home in Florida, worked security for Hubert H. Humphrey, built computers for NASA and worked with civil defense using ham radios among many other fascinating things. As a PVT in the Army Reserves, Dave worked on the Military Auxiliary Radio System (MARS) project. He kept a radio tower, ham radios and his FCC license in working order and spoke to people over the airwaves from all over the world. His family moved to Florida when Dave got out of school. He worked for Pratt-Whitney in the early 1960's and lived in Japan while working for RCA in the late 60's. When he returned to the US he worked as a Florida police officer for a period. He worked with the FBI during a case and was sworn in as a Deputy Sheriff. In the early 70's Dave moved to Tulsa, Oklahoma. He designed computers for Telex and Murphy Industries among other companies then later worked out of his home on computer projects. Once Dave retired from 9 to 5 jobs, he took part-time employment with Home Depot, Drysdale's Western Wear and Mill Creek Lumber . Dave devoted a good section of his life to memberships in the Masons, Elks, Moose Lodges and the Shriners. He achieved his 32nd degree in the Masons, and served several years as the Exalted Ruler for the Tulsa chapter of the Elk's Lodge. Dave enjoyed keeping fit by exercising, biking, walking and running. He ran in the Tulsa Run, rode bicycles all over Tulsa and took long walks and hikes. His love for the outdoors included fishing and marksmanship as well. Dave ran a photography studio out of his house for a few years. He photographed many weddings and other events in the Green Country area. One of his photos was featured on the front page of the Tulsa World. He started riding motorcycles at age 14. Dave made several long road trips on his motorcycles in his 30's and 40's. His adventures would take him from Tulsa, Oklahoma to California or out East to Florida and back. When Dave got old enough to drive, he bought his first car, a 1949 convertible for $700. Later, Dave enjoyed buying new Jeeps to drive and painted his logo, "The Real McCoy", on his fender or tailgate. Dave is survived by his wife of six years, caregiver and partner for life, Sheryl (Macoubrie) McCoy; son David Matthew McCoy of Tustin, California; daughter Lori (McCoy) Thompson and her husband Tod, of Jupiter, Florida; 3 grandchildren and 5 great-grandchildren; brother, Lawrence Michael and Alice McCoy, of Idaho; as well as numerous nieces and nephews, family and friends. Dave was preceded in death by his parents, Lawrence McCoy and Eleanor (Price) McCoy; sisters, Beverly Ann (McCoy) Carter and Judith Darlene (McCoy) Hildreth. Funeral Service will be 2:00 P.M., Friday, June 3, 2022 at Moore's Southlawn Chapel, 9350 E. 51st, Tulsa, OK. Moore's Southlawn 918-663-2233

David Price McCoy, "Dave", was born November 6th, 1937 in Marietta, Ohio to Lawrence Edgar McCoy and Eleanor Jane (Price) McCoy. He passed away on May 24th, 2022 in Tulsa, Oklahoma. He was 84 years old. Dave gave his life to Jesus when he was... View Obituary & Service Information

The family of David P. McCoy created this Life Tributes page to make it easy to share your memories.

Send flowers to the McCoy family.