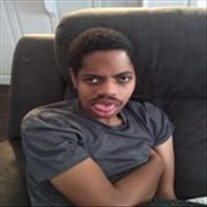 DeAngelo M. Carter Born December 14, 1992 Died October 15, 2021 De Angelo was born December 14, 1992 in NE, Oklahoma. He was the son of Tona Carter and Jerome Parks and was the second of three children born to Tona and Jerome. DeAngelo was the 5th Generation in the Joseph West Family. He was born at Muskogee General in 1992. He is also in the lineage of the Carter, Parks, Woodfork, McClinton, Frazier, Washington, Scroggins, Guest, and Davis. De Angelo was preceded in death by his mother, Tona Carter and his paternal great-grandparents, Clarence Scroggins Sr. and Mildred Marie West-Guest Scroggins, and maternal great-grandparents, Cornelius and Laura Carter. Although he was born with many health challenges and had them throughout his life, De Angelo exemplified the many qualities pleasing to God. His legacy to the family will be the love he had in his heart and being an organ donation participant so others could live. Through De Angelo's treatment by specialist who came to Oklahoma from the Chicago, Illinois area, many lives were extended and they have a greater quality of life through his life-saving gifts. Blessed are the pure in heart, for they will see God (Matthew 5:8). De Angelo leaves to cherish his memory his father Jerome Parks; his grandparents C. E. (Susan) Scroggins and Angeline (David) Brooks, Roger and Marilyn Parks; his two brothers Christopher (Jameliah Thierry) Carter and Jordan (Chyanne) Carter; half- sisters, Megan Parks, Mariah Parks, J'Lynn Parks, Jacie Parks; half-brother, C.J. Parks, Jr.; his uncles, Tracy (Michelle) Scroggins, Michael Carter, Jeremy Carter, Kendon Carter, and Sakar (Tika) Scroggins; aunt, Sharifa Britt-Scroggins; and a host of other aunts, uncles, cousins, nieces, nephews, other relatives and friends. My Beloved Grandson Viewing will be 10AM-8PM, Friday, October 22, 2021 at Moore's Southlawn, 9350 E. 51st, Tulsa, OK. Funeral Service will be 10:00 A.M., Saturday, October 23, 2021 at Moore's Southlawn Chapel. Moore's Southlawn 918-663-2233 share memories at www.moorefuneral.com

The family of DeAngelo M. Carter created this Life Tributes page to make it easy to share your memories.

Send flowers to the Carter family.