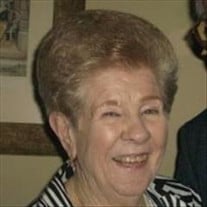 On June 14th, 2021 Delores Paulene Geurin (nee VanHorn) removed the shackles of Alzheimer's and gained her freedom to spend eternity with her Lord and Savior Jesus Christ and her beloved Herman. Delores was born April 1st of 1932 to Frank and Hazel VanHorn in Dewey, Oklahoma. She attended school in Dewey, graduating from Dewey High School in 1951. While in high school, Delores would spend time at the skating rink in Dewey. As you would think, the boys from nearby Bartlesville would show up. This is where she met the love and light of her world, Herman. They would go on to be married July 22nd, 1950. Family was everything to Delores. After six years of marriage, Delores gave birth to the other man in her life on January 21st, 1956, Donald Edwin Geurin. Delores was so proud of her boy. When she would talk about Don, her eyes would light up the most pristine blue you'd ever seen. During her time at Grace Living, her entire demeanor would change when he walked into her room. She would immediately say "there's my boy" with the biggest smile on her face. In August of 1981, Delores was handed the gift of a beautiful granddaughter, Sara Ellen. They were extremely close, having a bond like no other! Now, this didn't keep Delores from keeping her in line when needed. While at Grace, there were several "Sara" clones she would constantly care for. Mothering came naturally to Delores. Home and family time were so very important to her. She was first and foremost a caregiver. Delores was full of life! She spent time on a bowling league (you'd see her technique come out during a game of skee-ball), painted, and loved to travel. She and Herman would load up their trailer, hop in the van, and head off to Branson, the lake, or just about anywhere to just travel. Camping life was very fitting for the both of them as they loved being around people. Delores has an eye for color. With Herman being a builder, Delores was the decorator. She loved helping bring it all together. Her beloved Herman of 67 years, daughter Paula Jean, and her parents preceded Delores in death. Mourning her loss are son and daughter-in-law, Don and Pati Geurin of Jenks; granddaughter and grandson-in-law, Sara and Rick Breland of Glenpool; brother-in-law and sister-in-law, David and Donna Geurin of Billings, Montana; and a host of nieces, nephews, cousins, and friends. We ask that in lieu of flowers and plants (some family members have severe allergies/health concerns) a donation to the Oklahoma Alzheimer's Association chapter or preferred charity of your choice be made in her honor. We as a family gave Delores our word, we would continue the fight in her honor. Visitation will be 6-8PM, Thursday, June 17, 2021 at Moore's Southlawn, 9350 East 51st Street, Tulsa, Oklahoma. Graveside services will be held Friday, June 18th at 10:00am at Ridgelawn Cemetery in Collinsville. If possible, please wear something purple to support Alzheimer's Awareness. We love you mom! Moore's Southlawn 918-663-2233

On June 14th, 2021 Delores Paulene Geurin (nee VanHorn) removed the shackles of Alzheimer's and gained her freedom to spend eternity with her Lord and Savior Jesus Christ and her beloved Herman. Delores was born April 1st of 1932 to Frank... View Obituary & Service Information

The family of Delores Paulene Geurin created this Life Tributes page to make it easy to share your memories.

Send flowers to the Geurin family.