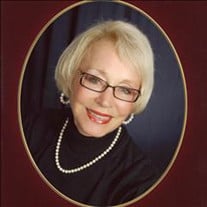 Deloris G. Messick, long-time Tulsa resident passed early Sunday morning, March 27th, 2022, at her home in Aberdeen Heights assisted living community. Born November 29, 1933, she was 88 years old. Mrs. Messick attended Robertson Elementary, Clinton Jr High and Daniel Webster High Schools in Tulsa. She went to Oklahoma State University or Oklahoma A & M College, as it was then called, where she majored in Physical Education. This is also where she met her husband of 56 years, Paul. That was the end of her formal education...to be replaced by wife, mother, Girl Scout leader, model, singer, golfer and too many other titles to mention. She was one of those people you enjoyed being around. Before she was 21, this new mother who had never been out of the state of Oklahoma traveled with her 9-month-old daughter, Paula, to join Paul who was stationed in England in the Air Force. Returning to the States, son Dean was born shortly thereafter. Dual citizenship? Although their time in England was relatively short, she never lost her love of travel and all things "British", including, but not limited to Queen Elizabeth II and her family and of course, James Bond, particularly when played by Sean Connery. This love of travel continued with trips to Mackinac Island and Mt Rushmore with her parents, a trip to the Holy Land with her mother, as well as tours of Italy and multiple cruises in the Caribbean with friends. Her last voyage was to Alaska's Inside Passage with her kids & grandkids in 2011. She & Paul traveled many places in Oklahoma, surrounding states and Mexico during their years of involvement with Lay Witness Missions, where she sang & Paul taught. Mrs. Messick was an avid golfer and member of Tulsa Country Club, joining the "Hole in One" Club and achieving that goal shortly thereafter. Deloris grew up in the Catholic Church, but when she married a VERY Southern Baptist, Paul, a compromise had to be reached...Trinity Methodist Church, where they were members for nearly 50 years. They came to Asbury in 2005, where they were members of both the Joy and Seekers Sunday School classes. She is preceded in death by her husband, Paul W Messick, son Dean H Messick, parents A. L. & Beulah M Hart, and brothers Wyman G & Marshall L Hart. Her surviving family includes sisters & brothers-in law, Liz & Dale Groden of Tulsa, Connie & Jack Kearbey of Collinsville, daughter & son-in-law, Paula & Michael Viseur of Tulsa, grandsons & spouses, Grant & Jenny Golliver of Broken Arrow, Matthew & Martha Golliver of Ballwin, MO, John & Sarah Messick of Raleigh, NC, granddaughter Elizabeth Messick of Greensboro and 6 great grandchildren, Cash Golliver, Preston Golliver, Ava Messick, Charlize Golliver, Victoria Golliver and Hayes Messick. In lieu of flowers, donations may be made to the Parkinson's Foundation. Viewing will be 10AM-8PM, Thursday, March 31, 2022 with family greeting friends from 6-8PM, both at Moore's Southlawn, 9350 E. 51st, Tulsa, OK. Memorial Service will be 11:00 A.M., Friday, April 1, 2022 at Asbury Church, 6767 S. Mingo, Tulsa, OK. Moore's Southlawn 918-663-2233

The family of Deloris Geraldine (Hart) Messick created this Life Tributes page to make it easy to share your memories.

Send flowers to the Messick family.