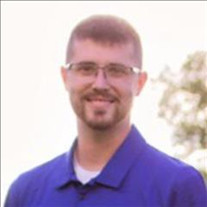 Derek H. Edmisten, 32, passed away peacefully on Saturday, October 9th, 2021 with his mother, Lisa Barfield, at his bedside. He was the first baby, in the United States, born on Christmas Day, December 25, 1988, to Lisa Barfield and the late Daniel Edmisten, of Tulsa, OK. As a child, Derek was a very active kid with multiple siblings, Jacob, Joshua, Dallas, Kristen, Britney, and Shannon - playing sports together or quick to try a new wrestling move that he had seen on WWF. He loved spending as much time as he could with his grandparents, Betty and Don Neel, either grabbing a quick grape soda pop, after daycare or practicing his swing off of a plastic wiffle ball, in the front yard. At an early age, Derek quickly picked up the talents of becoming a baseball player starting in T-ball and working his way up to be the leading pitcher for both Union High School's baseball team and Broken Arrow High School's baseball team, until his graduation from BA. He went on to study Criminal Justice and worked for various correctional facilities and police forces. Embracing the outdoors or a good Oklahoma State football game. He would spend hours chasing his two children, Oaklee and Brayden, around the yard, as they would both run in opposite directions, smiling and laughing gleefully. Derek is survived by his children, Oaklee and Brayden, his mother, Lisa Barfield, his grandparents, Don and Betty Neel, His siblings, Jacob, Joshua, Dallas, Kristen, Britney, and Shannon. He was preceded in death by his father Daniel Edmisten, his older brother Bobby Hurt Jr., his grandparents Ed and Helen Edmisten, and his uncle Troy Waites. The family would like to thank those for the outpour of love and condolences for the loss of Derek. Memorial Service will be 2:00 P.M., Saturday, October 23, 2021 at Moore's Southlawn Chapel, 9350 E. 51st, Tulsa, OK. Moore's Southlawn 918-663-2233

Derek H. Edmisten, 32, passed away peacefully on Saturday, October 9th, 2021 with his mother, Lisa Barfield, at his bedside. He was the first baby, in the United States, born on Christmas Day, December 25, 1988, to Lisa Barfield and the late... View Obituary & Service Information

The family of Derek H. Edmisten created this Life Tributes page to make it easy to share your memories.

Send flowers to the Edmisten family.