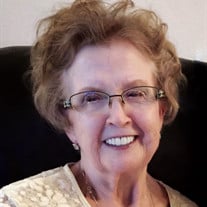 Diana Marie Terrell was reunited with the love of her life at 11:33 am on November 14th, 2021. Her beloved husband of 42 years, Thomas Lee Terrell. Diana spent the past 23 years talking about how much she looked forward to seeing him in heaven. Tom and Diana were married in Ellis, Kansas, on August 17th, 1957. Diana lived a long, adventurous life traveling worldwide. She is survived by two children, Tamra (Terrell) Hill and Todd Terrell. She was a beloved Grandma to 4 grandchildren Tabitha Bohannan, Tara Brown, Melissa Brown, and Ryan Bisset. She was an adored great-grandmother to 6 great-grandchildren, Logan Norris, Bryson Wingfield, Madison Wingfield, Grace Brown, Faith Brown, and Asher Parks. She was a cherished dog-grandma to our special four-legged family member Henry. Diana worked hard during her life; she graduated with honors from The University of Tulsa, received a Bachelor of Science in Nursing, and was awarded placement on the Dean's list for her outstanding academic achievements. She went on to work at St. John's Hospital in Tulsa, Oklahoma, for many years, retiring in 1999. Diana held leadership roles in her sorority Beta Sigma Phi; she was awarded Upsilon Delta Girl of the year in 1973-74. She was very involved in her children's PTA, where she also held leadership roles. She loved to travel with her family and friends. She was fascinated with her Volga German heritage and accomplished her lifelong desire of visiting Catherine's Palace in Saint Petersburg, Russia, with her oldest Granddaughter in 2013. She enjoyed gardening; pink tulips were her favorite flower, theatrical arts; she held an annual membership to the Tulsa Symphony and played bridge weekly with the LDG Bridge Club. She took great pride in decorating her home with her valued treasures, most of which she picked up along her travels. She especially loved her chicken and rooster collection to which her family and friends kept her in an abundance of. She loved to sing, laugh, and dance. Most of all, she loved the time spent with her husband, children, grandchildren, great grandchildren, sisters, and nephews. Her family was her most beloved treasure of all. She often spoke of her late husband Tom in heaven preparing their mansion for her arrival, where he will be waiting to greet his darling wife. Funeral services were handled by Moore Funeral Home - Southlawn Chapel.

Diana Marie Terrell was reunited with the love of her life at 11:33 am on November 14th, 2021. Her beloved husband of 42 years, Thomas Lee Terrell. Diana spent the past 23 years talking about how much she looked forward to seeing him in heaven.... View Obituary & Service Information

The family of Diana Marie Terrell created this Life Tributes page to make it easy to share your memories.

Diana Marie Terrell was reunited with the love of her life at...

Send flowers to the Terrell family.