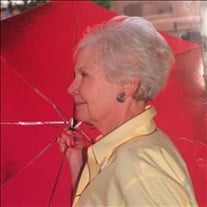 Diane Meredith Parrett, 85, died in Tulsa on January 25, 2022, after a short illness. Her husband of 20 years, James (Jim) Parrett, was by her side. Born on April 23, 1936, to Otis W. and Alice Elizabeth (Hazelton) Winchester in Tulsa, OK, Diane described her childhood with older brother, Bill, as idyllic. Diane graduated from Tulsa Central H.S. where she met and married Richard (Dick) R. McConkay, the father of her three children. After that marriage ended, Diane completed her bachelor's degree in Education at the University of Tulsa. During that time, she met and married Gary A. Patterson, and together they happily raised her children. She was married to Gary for 25 years, until his death. She was a dedicated and compassionate teacher for the Tulsa Public School system at Jackson Elementary, where she developed many lasting friendships with fellow teachers, known lovingly as "The Jackson Survivors." Diane remained active after retirement from TPS, volunteering at Day Center for Homeless and Hillcrest Hospital. She was especially fond of her time as a docent for Philbrook Museum. Shortly before she died, Diane expressed that she had lived an incredibly happy life and she loved her children and loved reliving their childhood through her grandchildren. In addition to her parents and late husband Gary, Diane was predeceased by her daughter Karen Elaine (McConkay) Friley, and grandson Ian Scott Bartels. Surviving is her husband Jim Parrett, daughter Jan (McConkay) Glendening, husband Robb, son Rick McConkay, wife Theresa, grandchildren, Michael Chahanovich, Ashley (McConkay) Wooden, Kate McConkay and Alice McCombs, brother William (Bill) Winchester his wife Lois, five great-grandchildren, nephews, nieces, cousins and honorary family members.

Diane Meredith Parrett, 85, died in Tulsa on January 25, 2022, after a short illness. Her husband of 20 years, James (Jim) Parrett, was by her side. Born on April 23, 1936, to Otis W. and Alice Elizabeth (Hazelton) Winchester in Tulsa, OK, Diane... View Obituary & Service Information

The family of Diane Meredith Parrett created this Life Tributes page to make it easy to share your memories.

Send flowers to the Parrett family.