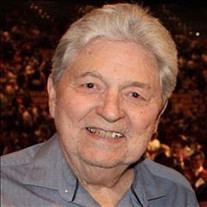 Donald (Don) Ray Boyd was a loving husband, father, grandfather, and great-grandfather; a friend to all, and faithful servant of the Lord. He was born to parents Curtis and Ruby Boyd on April 8, 1944 in Locust Grove, Oklahoma. Don attended Claremore High School where he met his future wife, Avie Corley. The two started dating shortly after graduation and were married October of 1963. Together, they enjoyed 58 years and nine months of marriage. Don and Avie celebrated their first wedding anniversary and welcomed their first child, Darrell Ray, at McChord Air Force Base in Washington state. After finishing his contract with the Air Force in 1966, the young family moved back to Claremore, where they would welcome their two daughters, Cindy and Tina. In 1980, the family moved to Olympia, Washington after Don's job required him to relocate. Here, Don and Avie raised their three kids and would eventually retire. In 2008, the couple moved to Jenks, Oklahoma where he lived until the time of his passing. There is nothing Don enjoyed more than working with his hands. In his younger years, you could always find a car in his garage, although it was never his nor his wife's. Friends and neighbors would bring their cars to Don, not the mechanic, when the check-engine light came on. He loved being able to strip a car down to a pile of parts, put it all back together and make it run like new. Later in life, he transitioned from cars to home projects. In 2009, he started his business, "Just Handy," as a way to help his daughter Cindy and her family in building a forever home. After the house was complete, he continued to work as a contractor; performing every job from installing ceiling fans to remodeling kitchens and bathrooms. Don's walk with faith took on a new meaning when he met Pastor Greg Ables and Pastor Chris Beasley of Newspring Family Church. The three clicked right away, and Don took on his role as "Unofficial Pastor Don." He left his fingerprints all over the building and on the hearts that passed through it. Don assisted with everything from repairs to VBS, senior luncheons, security and brewing coffee on Sunday mornings. You could almost always find Don fixing something, but if you couldn't find him on the jobsite or in the garage, you were sure to find him leaned back in his recliner with his dogs Lucy, Zoe and Gretta in his lap. He loved in his own, quiet way. Whether that meant sending Avie flowers with a card, simply signed, "Just because," tightening a loose screw on a cabinet handle, or pestering his grandkids in the way only a grandpa can. He never failed to put the needs of others before his own. Don passed away peacefully at the age of 78 on Saturday, June 11, surrounded by his loving family. He is preceded in death by his parents, Curtis and Ruby Boyd, and his sister Patsy Keller. Don is survived by his wife, Avie Boyd. His children and their spouses: Darrell Boyd, wife Alisha; Cindy Gibson, husband Jason; and Tina Bourbon, husband Don. His grandchildren, Brett Boyd, wife Kari; Kaitlin Palmer, husband Jordan; Ryan and Conner Bourbon; and Hunter and Wyatt Gibson. His two great-grandchildren, Kinley and Brynn Boyd. As well as many cousins, nieces and nephews. Don is also survived by the individuals in his life that he loved like family: Chris, Stephanie, Meagan, Cate, and Addison Beasley. Greg and Tina Ables, Whitley and Mecklin Ables-Burr, Patrick, Hayley, Axler, and Timber Day. Jacob, Teri and Rachel McMillian. Sarah, Jeff and Riley Smith, along with his entire church family and friends. Visitation will take place at Moore Southlawn Funeral Home on Friday, June 17 from 4 to 7 p.m. His celebration of life service is set to be held at 1 p.m. on Saturday, June 18 at Newspring Family Church with graveside service to follow at Memorial Park Cemetery. His celebration of life will be livestreamed and can be viewed here . (newspringchurch.com)

Donald (Don) Ray Boyd was a loving husband, father, grandfather, and great-grandfather; a friend to all, and faithful servant of the Lord. He was born to parents Curtis and Ruby Boyd on April 8, 1944 in Locust Grove, Oklahoma. Don attended... View Obituary & Service Information

The family of Donald Ray Boyd created this Life Tributes page to make it easy to share your memories.

Send flowers to the Boyd family.