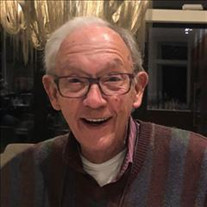 Donald Kerr, Jr. went to Heaven on January 14, 2022, after a brief illness. He was born December 15, 1946, to Eileen "Stevie" Kerr and Lt Col Donald Kerr in McAlester, OK. He graduated from McAlester High School and joined the US Army Reserves. Don married Lynda Smith and they had a daughter, Cara. In 1980, Don married Terry Thompson Smith, and they welcomed sons Benjamin and Joshua. Don was preceded in death by his parents, former wife Terry Kerr, and brother Clint. He is survived by his three children: Cara Barnes (Robert); Ben Kerr (Heather); and Josh Kerr as well as a sister, Kay Kerr Sweeney. Don was a devoted P-Paw to Ashton, Bennett, Emily, and Claire and enjoyed having lunch with them at school weekly. Don especially loved to sneak in a Mountain Dew for Bennett, and often could be found taking the grandkids to Braum's for ice cream. Don never met a stranger and spent many years working as a manufacturer's representative with customers all over Oklahoma, Texas, and Arkansas. In the early 1990s, Don founded the discount store Cheapo Depo, which soon grew to be six stores across the Tulsa area. Don loved people and formed lifelong relationships with his employees, suppliers, and customers. His greatest joy was that the stores enabled him to help others, whether by donating money, merchandise, or time. Don was passionate about ministering to incarcerated people and their families, helping them transition successfully back into the world. He worked tirelessly with Celebrate Recovery Prison Ministries and was instrumental in starting the prison bus ministry in Oklahoma. He believed in this ministry so much that he provided two buses to help transport people to and from the meetings. He also served at Genesis 1 Network in Tulsa and was an active board member of Wings of Freedom. As we remember Don, we know these two scriptures were paramount in the shaping of Don's life: The Prayer of Jabez: Jabez called upon the God of Israel, saying, "Oh that you would bless me and enlarge my border, and that your hand might be with me, and that you would keep me from harm so that it might not bring me pain! And God granted what he asked." -Chronicles 4:10 "Therefore, since we have been justified through faith, we have peace with God through our Lord Jesus Christ, through whom we have gained access by faith into this grace in which we now stand. ... But God demonstrates his own love for us in this: While we were still sinners, Christ died for us" Romans 5:1-8 The family is deeply appreciative to Rob Lawley, Terry & Leslie Fischer, and Rick & Bonnie Cain for the love they showed Don. Viewing will be at 1pm Thursday, January 20th at Southern Hills Baptist Church, 2218 E. 56th Place, Tulsa, OK with funeral immediately following at 2pm. Burial will be 3pm Friday at Carney Cemetery. In lieu of flowers, please consider donating to Celebrate Recovery at Southern Hills Baptist Church. Moore's Southlawn 918-663-2233 share memories at www.moorefuneral.com

Donald Kerr, Jr. went to Heaven on January 14, 2022, after a brief illness. He was born December 15, 1946, to Eileen "Stevie" Kerr and Lt Col Donald Kerr in McAlester, OK. He graduated from McAlester High School and joined the US Army Reserves.... View Obituary & Service Information

The family of Donald Kerr, Jr. created this Life Tributes page to make it easy to share your memories.

Send flowers to the Kerr family.