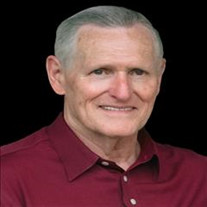 Donald Russell Mellott, a native Cherokee Indian, was born June 5, 1944, in Seymour, Indiana, and went to be with the Lord on May 20, 2022, in Tulsa, Oklahoma, at the age of 77. Don was preceded in death by his parents, Fred and Gloria (Bradshaw) Mellott. Don is survived by his wife, Janet, whom he married on May 29, 1964; his children: Janette (Sam) VanMeter, Angela Davis, Stephen (Michal) Mellott, and Christina (Kevin) Harris; his grandchildren: Sarah Davis, Bradley (Shelby) Davis, Dane VanMeter, Samantha (Chris) Erickson, Lilly Mellott, Madeline Mellott, Ella Harris, Olivia Harris, Emmi Harris, Luke Harris, and Leia Harris; great grandchildren: Kennedy Davis, Lincoln Davis, and Harper Davis; his sister, Sheryl (John) McGuire; mother-in-law, Wanda Nye, brother-in-law, Monte (Susan) Nye, and nieces. Don was a graduate of Will Rogers High School in 1962. As a three year varsity starter, Don played several football positions from 1959 to 1962 and was a running back most of his senior year, earning him honors as an Oklahoma high school All-State player and high school All-American. He received a full, four-year football scholarship to the University of Oklahoma. He readily acknowledged that Will Rogers offered him the opportunity to learn many of life's lessons: goal-setting, perseverance, tenacity, teamwork, and a strong drive to succeed at reaching goals. Don credits the lessons learned at Will Rogers, including the experiences of participating in the football program, with establishing a positive direction in his life that led to his many successes. When Don learned about the new Will Rogers opening in the Fall of 2011, he became very interested in helping the football program rebuild. Don knew how important the football program could be for some young men because of his own experience in the program. There were critical needs for equipment, uniforms, and other football gear. In May 2012, Don contributed a major grant for the football program and inspired other donors to match it through a challenge grant. His contribution, plus the matching monies raised, were used to purchase weight training equipment, football training equipment, uniforms, and other gear, transportation, food for pre-game and travel days, and football camps. In 2015, Don was inducted into the Will Rogers High School Hall of Fame. Throughout his lifetime Don was a successful businessman and entrepreneur. Don has been a principal owner in five businesses. In 1988, he started Heater Specialists (HSI), an integrated single-source manufacturer of refinery equipment. In 1993 Don started Mohawk Field Services (MFSI) specializing in the erection, revamp, repair and installation of heaters, boilers and other refinery equipment. Don's experience and leadership grew HSI and MFSI to the industry leading companies they are today. In the late 1970s, Don and Janet started Fox Hollow Farms in Cherokee County, Oklahoma. By 1980 Fox Hollow Farms was established in the Charolais breed and known for their progressive genetics and success. Fox Hollow has exhibited many champion animals winning state fairs, Junior Nationals, the American Royal and the National Western Stock Show. Two of his favorite achievements were breeding and raising the 1986-87 Show Heifer of the Year, and the 43rd Role of Excellence Sire, the youngest bull to receive the honor at that time. Don was the Charolais Superintendent at the Tulsa State Fair for many years. Fox Hollow Farms continues to be a premier breeder of Charolais genetics Don was a highly interesting and strongly motivated person who succeeded at whatever he did. He was a strong believer in Jesus. Don was a family man who loved his wife Janet, their four children, and their many grandchildren, and he was a huge part of each of their lives. Along with being a successful athlete, businessman and rancher, he was also a philanthropist who gave to many ministries and individuals. In addition, he served as a deacon at Glad Tidings Assembly, and Faith Assembly of God. He helped start and was a board member of New Life Christian Academy, Peggs Public School and he was a founding board member of the Tulsa Dream Center. In 1998, Don and Janet began working with Victory Church in Tulsa to open an outreach center in an area with the highest crime rate in the city. Don and Janet gave the first major contribution to help start the Tulsa Dream Center, and continue to be major contributors. Tulsa Dream Center is housed in a 38,000 square foot building that offers an after-school program for grades three through seven, a summer program for kids, GED classes to help those who have not graduated from high school, clothing and weekly food giveaway and a major medical clinic to name a few of its services. For more information please visit www.tulsadreamcenter.org. A memorial service to honor Don's life will be held on Friday, June 3, 2022, at Victory Church, 7700 S. Lewis, Tulsa, Oklahoma, at 2:00pm. For anyone who would like to honor Don Mellott's memory, please consider a donation to one of the following: Tulsa Dream Center https://bit.ly/3yXu3QT Will Rogers High School Community Fund https://bit.ly/3yX5uUg Under The Direction of Moore's Southlawn Chapel, 918-663-2233. Share memories at www.moorefuneral.com

Donald Russell Mellott, a native Cherokee Indian, was born June 5, 1944, in Seymour, Indiana, and went to be with the Lord on May 20, 2022, in Tulsa, Oklahoma, at the age of 77. Don was preceded in death by his parents, Fred and Gloria (Bradshaw)... View Obituary & Service Information

The family of Donald Russell Mellott created this Life Tributes page to make it easy to share your memories.

Send flowers to the Mellott family.