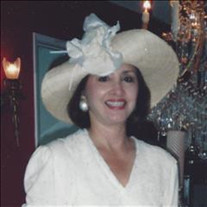 Doretta Jane (BlueJacket) Karns Pottorff, age 84, of Tulsa, Oklahoma, went to paradise to be with her Savior on May 28, 2022 in the morning hours. Doretta was diagnosed with ALS, (amyotrophic lateral sclerosis). She was diagnosed with this disease last summer and the progression was very fast. She was very close to all of her family throughout her life. Doretta loved her Barnard and Alexander heritage from Coffeyville and Independence, Kansas; her love for her Native American heritage; her many aunts, uncle and cousins were always on her list of concerns and in her prayers. Doretta was such a caring person and enjoyed being with her Bunko friends, Bridge Club members and she loved to entertain at her home with special event dinners, crawfish boils for her husband's business ventures. She used her management and interior design abilities to assist in many organizations in Tulsa such as the American Theatre, loved working and supporting the Shawnee and the Cherokee Nation activities and culture. She placed her Native American Heritage as the greatest blessing she could have. She was proud she was the 6th generation from the Shawnee War Chief, BlueJacket, "Weyapiersenwah",Tecumseh's Shawnee predecessor, who began the fight to save Shawnee lands from the white juggernaut moving West. Doretta BlueJacket had the same fighting spirit but the ability to be gracious and carrying, always being kind to others. Doretta never missed a day of school from the 1st grade until she graduated in 1955, from Field Kindley High School in Coffeyville, KS. She loved her reunions. She loved attending Coffeyville Junior College and was a cheerleader for the football team. She developed an early love for football. After earning her Associates Degree, she married her first husband, A. W. Karns, II in 1957 in Coffeyville. She had two children with him during her travels to Norman, Oklahoma to attend OU and Colorado State University in Fort Collins, CO.. She took many art and design courses during the education of her husband, this served her well in her professional pursuits. She moved to Auckland, NZ with her family and became the number one interior designer in New Zealand. After her divorce, she spent 8 years in NZ in decorating and design, and she continually bought homes, refurbished and decorated them, flipping them before the world knew what "flipping houses" was. Doretta made many friends and was in many publications as to her accomplishments in NZ. Her daughter wanted to return to the United States, so to please her, she sold most of her possessions, moved some and returned to the United States. She told her son and daughter that they all were flying back to America first class. "We left America first class and we are going back first class". As with this wonderful person, she personified not only outward beauty but internal spiritual beauty and class. Doretta was on her own in America and loved Newport Beach, CA. She was searching for an opportunity to support her family as a single Mom and visited Georgia Frontier, owner of the Los Angeles Rams. When she arrived at Georgia's house for her initial interview, the maid told her to go to the back door; Doretta said in a nice but stern manner to "please move out of my way, I don't go into backdoors, I always use the front door." Georgia was very impressed and she got the position of Manager of the Anaheim Stadium, Luxury Boxes, and many related professional responsibilities for the LA Rams. She is the first woman manager hired into the National Football League. She had many NFL friends both on the teams, management, major fans and made many acquaintances of government notables, Hollywood celebrities, entertainment "stars". Doretta used her popularity with celebrities to build major non-profit organizations to fight child abuse in the Southern California area. When the LA Rams announced they were moving to St. Louis, she left the Rams and traveled for a year to decide what she wanted to do. She came back home, not to Coffeyville, but close. She settled in Tulsa in 1990, working with the founder of Indian Health Care, to build healthcare for her people. She remained loyal to this group and supportive of their efforts throughout her life in Tulsa. She became the property manager of a Milwaukee firm for their property holdings in Tulsa, namely the University Tower Apartments and Mansion House. She met her love of her life and he met his when he came to live in this facility. Doretta and Jim have had a 23 year relationship, married in 2005. This wonderful person made this world a better place for all of use wherever she went and with whomever she met. Doretta confirmed her trust in Christ as her Savior, and she loved the scripture, Ephesians 2:8,9. Doretta was preceded in death by her parents, Franklin Friar Bluejacket and Doris Ann Barnard and her son, Anthony W. Karns, III. She is survived by her husband, Jim D. Pottorff; two sisters, Sheryl Toman of Palm Desert, CA and Jolene Worthington, Chicago, Ill.; Daughter, Shawn Bluejacket Roccamo and her only grandchild and major joy of her life, Sidonie BlueJacket Roccamo of Tulsa, OK. She captured the hearts of her husbands daughter ; Melynda Fruge of Lake Charles, LA; Charlie Helen Adams of Iowa, LA. ; and son, Jim Pottorff, Jr.; four grandchildren, and four great-grandchildren. Viewing will be 10AM-8PM, Tuesday, May 31st with funeral service at 10am, Wednesday, June 1, 2022 both at Moore's Southlawn Funeral Home, Tulsa. Moore's Southlawn 918-663-2233

Doretta Jane (BlueJacket) Karns Pottorff, age 84, of Tulsa, Oklahoma, went to paradise to be with her Savior on May 28, 2022 in the morning hours. Doretta was diagnosed with ALS, (amyotrophic lateral sclerosis). She was diagnosed with this... View Obituary & Service Information

The family of Doretta Jane (Bluejacket) Karns Pottorff created this Life Tributes page to make it easy to share your memories.