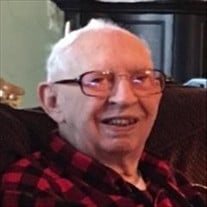 Lloyd E Oler, Jr. 1928 -2022 Lloyd E. Oler, Jr. was born Dec. 21, 1928 in Tulsa, Oklahoma to Thelma Fairless Oler and Lloyd E. Oler, Sr. He passed away peacefully on May 21, 2022 in Plano, Texas. From the time he was old enough to talk, he complained about being born on the shortest day of the year, giving him the shortest birthday of the year. He was a graduate of Will Rogers High School in Tulsa and playing trumpet in the Roundup Band was his favorite activity. He graduated from the University of Tulsa with a degree in Business Management, playing in the Golden Hurricane Band and he had many stories about band trips. Lloyd's summers were spent working the wheat harvest in Canadian County, OK on the family farm. He spent a portion of one lonely summer in Nebraska as a hired hand, but gave up on the harvest and hitch hiked back to Tulsa. He was active duty in the U S Army from 1951 through 1953 during the Korean Conflict. When the Army discovered how well he could type, he remained state side at Ft. Sill as a secretary to the Master Sergeant. In March of 1953, he married Doris Belle Spainhower in Lawton, OK. They both laughed about their wonderful "honeymoon" driving to the top of Mt. Scott and back, both having to return to work the next day. Much of his career was in the Oil and Gas industry working for Sinclair, Atlantic Richfield, and White Shield. His love of the trumpet turned into a part time profession performing with the Tulsa Philharmonic, many of the area dance bands and for his church, Boston Avenue Methodist. He received his private pilot's license and enjoyed surveying the fields that he had worked for so many years. His constant companion at home was always a large dog, either a German Shepherd or a St. Bernard. The family wishes to thank the kind and skilled care from his Amity Hospice Team, Stacy, Kevin, and Cheryl as well as the loving caregivers at Joy House, Rhoda and Praise. He was preceded in death by his parents, his son in law, Tommy Guilbert, and his daughter in law, Marion Hanson Oler. Lloyd is survived by his daughter, Denise Lynn Guilbert of Richardson, TX, son, Kent Gordon Oler of Allen, TX and grandson, Tyler Keles Oler, also of Allen, TX as well as his bonus grandchildren Mark Guilbert, Stephanie Curtis, John Guilbert and bonus great grandchildren Brandon, Alex, Kortney, Daniel, Steven, Amanda and Sophia. Graveside Services: 2:30 PM Thursday, May 26, 2022 at Floral Haven Cemetery, 6500 South 129th East Ave. Broken Arrow, OK 74012 Moore's Eastlawn Chapel, 918-622-1155

The family of Doris S. Oler created this Life Tributes page to make it easy to share your memories.

Send flowers to the Oler family.