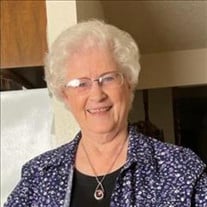 Doris Carol Hight was called home by our heavenly father on January 24, 2022 at the age of 79. She was born on August 9, 1942 to Claude Jones and Martha Isabelle Boyce in East Chicago, Indiana. Her family finally settled in Oswego, Kansas where she spent her formative years as a teenager. Those of you that met her then and are still friends of hers to this day know the beautiful woman, wife, and mother that she was. On May 21, 1960 she married the love of her life, Ronald Max Hight, in Parsons, Kansas at the Church of the Nazarene. The two of them spent no time before starting a family and beginning the trying and testing job of raising five rambunctious boys. In 1968 they moved to Tulsa, Oklahoma where they joined and immediately became a major part of Central Church of the Nazarene. The church was a vital part of who she was, making lifelong friends that were lasting and not replaceable. Over the years she enjoyed traveling the United States seeing what a great country God has blessed us with and visiting family and friends. Life was an adventure, and she had found the perfect man to spend it with. She was preceded in death by her parents, Claude and Martha Jones of Parsons, KS; sister Mila Jones of Oswego, KS; brother Kenneth Jones of Jay, OK; brother-in-law and spouse Kendall and Sharon Hight of Carl Junction, MO; sister-in-law Helen Hight of Carthage, MO. She is survived by her loving husband of 61 years, Max Hight of Tulsa; her sons - Ron Hight and his wife Roxie, Keith Hight, Brent Hight and his wife Sally, Wade Hight and his wife Charla, and Craig Hight and his wife Sheri; her 12 grandkids - Ashlie, Craig, Mason, Samuel, Alison, Mariah, Blake, Amy, Makaela, Rory, Bryce, & Thaddeus; and her 11 great grandkids with an additional one on its way. Visitation will be from 2-4PM, Sunday, January 30, 2022 at Moore's Southlawn, 9350 E 51st St., Tulsa, OK. Funeral Services will be 10 AM on Monday, January 31, 2022 at Central Church of the Nazarene, 7291 E 81st St., Tulsa, OK. Graveside Services will be on Tuesday, February 1st at 12PM at the Carl Junction Cemetery in Carl Junction, MO. Moore's Southlawn 918-663-2233

Doris Carol Hight was called home by our heavenly father on January 24, 2022 at the age of 79. She was born on August 9, 1942 to Claude Jones and Martha Isabelle Boyce in East Chicago, Indiana. Her family finally settled in Oswego, Kansas where... View Obituary & Service Information

The family of Doris C. Hight created this Life Tributes page to make it easy to share your memories.

Doris Carol Hight was called home by our heavenly father on January...

Send flowers to the Hight family.