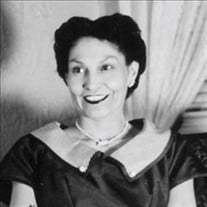 Dorothy Francis Wilson Jackson July 15, 1920 - June 21, 2022 Dorothy was called Home twenty-four days before her 102nd birthday. At the time of her passing she was the Delaware Tribe's oldest living fullblood. Dorothy was born on her family's allotment in Delaware, Oklahoma. Her father was Anderson Wilson; her mother was Lillie Parker Wilson. Dorothy's maternal grandparents were George Parker and Mary Bigfield Parker. Her paternal grandparents were Adam Wilson and Amanda Bascomb Wilson. She graduated from Delaware High School and later attended the Haskell Indian School, getting a degree in Business. After college, Dorothy got a job with the Department of Interior, in Washington, DC. Once WWII broke out, her department was moved to Chicago, Illinois. Ultimately, Dorothy got homesick, and was transferred to the Osage Agency in Pawhuska, Oklahoma, where she worked until 1947. Dorothy then moved to Tulsa, Oklahoma and started a job at Flint Steel Corp. She worked for Flint Steel from 1947 until it closed in 1983. She moved from being a drafting room clerk to secretary of one of the Vice Presidents. Dorothy was a dedicated employee and was the last person to leave the building when Flint Steel Corp. closed. It was during this time she also met her husband, Cecil Jackson. The two married in 1949. While she enjoyed many pursuits two of her favorite were archery and painting. She won many archery competition trophies, and her artwork won her many ribbons at Tulsa County and Tulsa State Fairs. Dorothy was extremely proud of being Lenape, and a citizen of the Delaware Tribe of Indians. It brought her joy to see her descendants dance; embrace Lenape culture and traditions; and be active citizens in the Delaware Tribe of Indians. Dorothy was preceded in death by her husband, Cecil Jackson; her brother, Titus Wilson; and sister, Ethel Quay Martin. She was also preceded in death by her two stepsons, Cecil Jackson, Jr. and Michael Jackson. Dorothy is survived by her son, Kenny Brown and his wife, Vicky; her two grandsons, Kenneth Duane Brown, and Rusty Creed Brown, and his husband, John Dukewits; her granddaughter, Carrie Hope Hosey, and her husband, Max; her great-granddaughters, Alyssa Quay Hosey, and Shelby Lane Brown; and her many great-great-grandchildren. Visitation will be 5-7PM, Thursday, June 23, 2022 at Moore's Southlawn, 9350 E. 51st, Tulsa, OK. Funeral Service will be 9:00 A.M., Friday, June 24, 2022 at Moore's Southlawn Chapel. Moore's Southlawn 918-663-2233

Dorothy Francis Wilson Jackson July 15, 1920 - June 21, 2022 Dorothy was called Home twenty-four days before her 102nd birthday. At the time of her passing she was the Delaware Tribe's oldest living fullblood. Dorothy was born on her family's... View Obituary & Service Information

The family of Dorothy F. Jackson created this Life Tributes page to make it easy to share your memories.

Send flowers to the Jackson family.