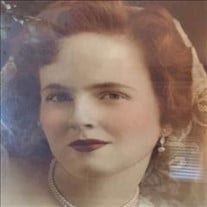 Dorothy D. McCormick, lifelong Tulsa resident, passed away peacefully at home on Saturday evening, October 2, 2021. She was 92. Dorothy was born August 29, 1929, and was the youngest of three children of William V. McCormick and Phebe Moulder McCormick. Her oldest brother, Bill, died in infancy, and her older brother, Don, passed away in 2012. She is survived by Don's children, two nephews and a niece, Zachary McCormick of Albuquerque, New Mexico, Egan McCormick of Los Alamos, New Mexico and Amy Anderson of San Diego, California. Dorothy is also survived by her cousin and dear friend, Barry Hensley, of Tulsa. Interestingly, Dorothy died in the same home where she had lived since 1936, when she was seven years old. All her life she lived with the painful memory of her father having died of a heart attack at the young age of 45, after the family's Thanksgiving dinner in 1936. Dorothy's mother, Phebe, raised her and her brother, Don, and sacrificed greatly to do so. A member of the Will Rogers High School class of 1947, Dorothy went on to the University of Tulsa where she graduated in 1951with a Bachelor of Arts degree. In college Dorothy was active in choir and the Tulsa Opera, interests that she pursued and enjoyed all through the 50's and 60's in many performances, including a number of leading roles, with both the Tulsa Opera and Tulsa Little Theater. You could always get a smile from her when you asked her to recall her starring role in the musical, Kiss Me Kate, in which she played opposite Broadway star, Ridge Bond. Oh - and not to mention the unforgettable memory of the applause and multiple encores following her performance as 2nd lead with Roberta Peters in Tulsa Opera's production of Lucia in 1958. What fame and acclaim might have been in pursuing that dream. Dorothy's professional career as a legal secretary, administrative assistant and office manager with the law firm of Hall and Sublett spanned over four decades. Her intelligence, mastery of the English language, attention to detail and her administrative and organizational skills made her a top-noche legal secretary and skilled paralegal. Clients, attorneys and judges alike would testify that Dorothy likely knew more oil and gas, title and probate law than most lawyers. At her job, there was no one better. Doro or "Miss D" to her many friends was a woman of varied and many talents and interests, in her day, before her flaming red hair turned gray, she was an actress, singer and artist. She had a sharp and inquisitive mind and was extremely well read. She was an independent and self-sufficient business woman who enjoyed managing her investments, who also loved to knit, creating beautiful sweaters for her family and friends. She could paint, do calligraphy, and for years made her own Christmas and birthday cards. She loved her crossword puzzles, sudoku, old movies and TV programs from the 60's. She was a loving daughter and caretaker of her mother, Phebe, in her final years. Dorothy was a lovely talented and truly remarkable woman. She will be missed and very fondly remembered. RIP Moore's Eastlawn Chapel 918-622-1155

Dorothy D. McCormick, lifelong Tulsa resident, passed away peacefully at home on Saturday evening, October 2, 2021. She was 92. Dorothy was born August 29, 1929, and was the youngest of three children of William V. McCormick and Phebe Moulder... View Obituary & Service Information

The family of Dorothy D. McCormick created this Life Tributes page to make it easy to share your memories.

Send flowers to the McCormick family.