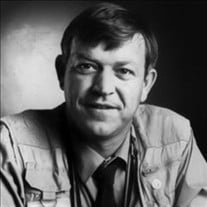 Doyle Sanders, 74, of Tulsa passed away early January 24th, 2022. Doyle was born in Leitchfield, KY on April 15th, 1947 to Oma Frances Wood and Calvin Coolidge Sanders. Doyle grew up in rural southwest Kentucky with his younger brother Ronald Lee Sanders. His parents and brother preceded him in death. In August 1965, Doyle enlisted in the United States Marine Corps. He served two tours in Vietnam (1966-1968) and participated in 28 battles as a Forward Observer directing naval gunfire. Doyle also served as a Marine Corps Security Guard at embassies in Ottawa, Canada and La Paz, Bolivia. Next, he served with the 2nd and 3rd Tank Battalions in Okinawa, Japan and Camp Lejeune, NC. Doyle's last two years in the Corps were spent in the Joint Public Affairs Office as a Combat Correspondent, photojournalist, and later the Editor of the Camp Lejeune Globe. From 1970 to 1980, Doyle was married to teacher Mary McIlrath and they welcomed two boys, Patrick and Jarrod. After 12 years in the Marines, Doyle worked as a photojournalist for the Arizona Republic in Phoenix. He covered a multitude of assignments, including sports, fashion, presidential visits, as well as local and state news. Doyle met his future wife, Susan O'Brien, while covering a bike club event at the Mogollon Rim. Married in 1983, Doyle and Susan relocated to Tulsa, OK (her home town) with their two children, Megan and Paul. Doyle worked as a photojournalist for the Tulsa Tribune until they closed in 1992. Doyle became more involved with his children as they started school. In addition to being a stay-at-home dad, he built a dark room and worked from home as a freelance photographer. He participated in photography events with the Tulsa Photo Collective, such as the North Tulsa Project. In the mid-2000's, Doyle joined the Albert E. Schwab Detachment of the Marine Corps League, where he served as Vice Commandant and Commandant. He organized programs such as Blankets for Vets, an annual Medal of Honor Day ceremony, and The Moving Wall. He was active with the Union High School Junior ROTC program with his youngest son, Paul. Additionally, Doyle was very passionate about genealogy and is considered the foremost authority on his family's history. Every so often, the world is graced with an exceptionally special person; Doyle was truly one-of-a-kind. He lived life to its fullest, accomplishing more in his 74 years than most people ever dream of achieving. He left a positive impression on all those who crossed his path, and his loss will be felt by many. Doyle is survived by his wife, Susan M. O'Brien M.D.; his children Patrick (Angie), Jarrod, Megan, and Paul Sanders; and granddaughter Harmony Sanders. No services are scheduled at this time. No Services are planned at this time. Moore's Southlawn 918-663-2233

The family of Doyle Sanders created this Life Tributes page to make it easy to share your memories.

Send flowers to the Sanders family.