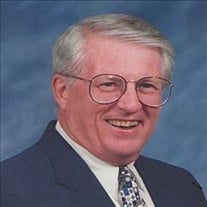 Earl Samuel Minter, Jr., was born in Oklahoma City, Oklahoma, on November 21, 1937. He entered into eternal rest at 10:45 p.m., Friday, March 4, 2022, after a short illness. He was born into a loving extended family to Earl Sr. and Lila Copp Minter, and lived on an acreage with Grandad & Grannie Minter, Uncle Horace and Aunt Thelma Windham, along with sister Sandra and cousins ,Earlene and Carl. After graduating from Northeast High School in Oklahoma City, Earl attended Oklahoma State University, earning a Bachelor's Degree in Business and an MBA. He married Carole Sue Graham on August 29, 1959. Earl started his career in St. Louis, then moved to Tulsa to begin a long career in computer sales with various companies. He started his own business, ESM Computer Marketing, in the early 1980's and operated the company until his retirement in the late 1990's. During retirement, Earl focused on helping meet the needs of others through church missions, including working with Backyard Missions of Kendall-Whittier Ministries, taking a mission trip to North Macedonia, and being the self-described "equipment manager" for Carole's pastoral ministry, carrying robes, books, etc. Earl was a longtime member of University United Methodist Church. Earl was preceded in death by his parents, Earl, Sr. and Lila, and by a granddaughter, Kathryn Elizabeth Minter. He is survived by his loving wife of 62 years, Carole Sue, son Jeff Minter and wife Betsy of Overland Park, Kansas, daughter Cindy Alonso and husband Tony of Tulsa, son Todd Minter of Tulsa, sister Sandra Connally and husband Jack of Dallas, TX, and cousins Earlene Fisher of Canton, MI, and Carl Windham of Oklahoma City. His seven grandchildren are Bryndon Minter of Austin, TX, Cameron Minter of Overland Park, KS, Ryann Alonso of Washington, DC, Bryce Alonso of Tulsa, Pete Alonso of Stillwater, Ethan Minter of Pittsburg, KS, and Parker Minter of Oklahoma City. Earl has a host of nieces and nephews and friends that will miss him greatly. The memorial service will be 1:00 p.m. Saturday, March 12th, at University United Methodist Church. Moore's Southlawn 918-663-2233. It will be livestreamed on the day of the service at https//www.facebook.com/uumctulsa

Earl Samuel Minter, Jr., was born in Oklahoma City, Oklahoma, on November 21, 1937. He entered into eternal rest at 10:45 p.m., Friday, March 4, 2022, after a short illness. He was born into a loving extended family to Earl Sr. and Lila Copp... View Obituary & Service Information

The family of Earl Samuel Minter, Jr. created this Life Tributes page to make it easy to share your memories.

Send flowers to the Minter family.