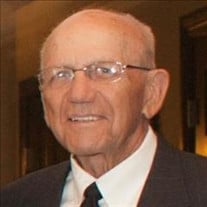 Edgar Robert Welch gently went to be with the Lord on Sunday, November 28, 2021. Ed was born in Tulsa on October 12, 1927, to Edgar and Aletha Welch. He was the youngest of the three children, Dorothy, Dann, and Ed (or Bob as he was known by his family). He attended Central High School in Tulsa where he met his future wife, Carol Anne Larkin. While at Central, he was on the wrestling team where he was 1st in the Oklahoma State Tournament and was 2nd in the National AAU Championship for the 133# weight class. He earned a full scholarship to OSU (then Oklahoma A&M) where he continued to wrestle placing 1st in the AAU Championship and 2nd in the NCAA Tournament in the 145# weight class one year. He was also very active as a member of Beta Theta Pi fraternity. He left OSU from 1946-1948 to enlist in the Army where he was a paratrooper in the 82nd Airborne achieving the rank of Buck Sargent. He returned to OSU where he married Carol Anne in 1950 and then graduated in Mechanical Engineering in 1952. He worked as a Petroleum Engineer for Texaco for the next 37 years and eventually headed up the Drilling Engineering section for the Central and Northeastern United States. Ed was very active when his sons were younger by coaching little league baseball in Wichita for Paul and pre-high school wrestling in Tulsa for Tom. He was an avid golfer playing every Saturday no matter what the weather (he was spray painting golf balls orange before orange balls became popular). After his retirement, he continued playing golf almost every day at the Oaks Country Club until the age of 88. He was very active at Kirk of the Hills where he attended and was a deacon and elder. He also taught the In-Depth Bible study class for 36 years. He also volunteered with Meals-On-Wheels for 13 years. He always said; however, that his most enjoyable activity was working with Literacy & Evangelism International where he was on the Board of Trustees for 19 years. LEI helps spread the gospel by constructing Bible content primers and then helping train those around the world who can't read their own languages. Ed was preceded in death by his parents, Edgar and Aletha Welch, his sister Dorothy McGilvray and his brother Dann Welch, as well as his wife of 57 years, Carol Anne, and his younger son, Thomas Howard Welch. He is survived by his son, Paul, two daughters-in-law, four granddaughters, and two great-grandsons as well as many loving nieces and nephews. He was a wonderful role model and taught us throughout his 94 years that the most important thing in life is to follow Jesus Christ. In lieu of flowers, contributions can be made to Literacy and Evangelism International or Kirk of the Hills, both in Tulsa, OK. Moore's Southlawn 918-663-2233

Edgar Robert Welch gently went to be with the Lord on Sunday, November 28, 2021. Ed was born in Tulsa on October 12, 1927, to Edgar and Aletha Welch. He was the youngest of the three children, Dorothy, Dann, and Ed (or Bob as he was known by... View Obituary & Service Information

The family of Edgar Robert Welch created this Life Tributes page to make it easy to share your memories.

Edgar Robert Welch gently went to be with the Lord on Sunday,...

Send flowers to the Welch family.