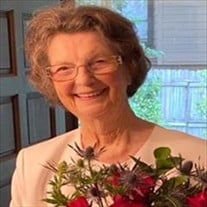 Elizabeth Anne Graham went to be with God on Monday, June 6, 2022 surrounded by her adoring family. She was born July 29, 1930, in Glasgow, Scotland to Elizabeth (Waddell) and Ernest Pearce, but grew up in London, England. Some of the moments that especially shaped her early life were being evacuated at the age of 9 and separated from her family during World War II, ending her formal education at age 14, working in a business office and meeting Andrew Graham at age 16. She married Drew Graham in January 1948 and had four children: Janice, Stuart, Russell and Helen. In 1954 during Billy Graham's London Crusades at Harringay, Drew and Anne surrendered their lives to God and devoted themselves to missions serving in England and Denmark. In April 1964, they moved their family to Tulsa, Oklahoma influenced by the ministry of T.L. Osborn and eventually made their home on Main Street in Jenks for about a decade. During that time, Anne began working for Jenks Public Schools as a teachers' aide and eventually in the accounting department retiring in 1992. Over the years, Anne has been an integral part of faith communities where she developed loving friendships for a lifetime including Soul Clinic, Beams of Light Tabernacle, Tulsa Christian Fellowship, OS/FO Church, Church of the Holy Spirit, St. Michael's Church and currently First Jenks United Methodist. She served for many years with Daughters of the King and Altar Guild. Anne was known for her intimate relationship with God and the love she poured out to others. She was an example of selflessness and hopefulness and taught each person she encountered about a life well-lived. Memories of her are sure to include roast beef dinners, cardinal birds, cups of tea, toast and marmalade, "Jeopardy", prayer, laughter, dancing and a little bit of Frank Sinatra. Left to cherish her memory are her sister Margaret and brother Ernie and families in England and her four children and their families: Janice and Terry Allyn; Philip, Rachel, Graham and Morgan Allyn; Hilary, Joe, Nathan and Natalie Gard; Stuart, Roz and Taylor Graham; Ian, Courtney, Evie, Aurora, Sullivan and Silas Graham; Russell, Rene' and Haley Graham; Leslie and Matt Greer; Helen, Dave, Hannah and Drew Harris; Lexi Weisberg. In lieu of flowers, donations to First Jenks United Methodist Church or St. Jude Children's Research Hospital can be made in her memory. Viewing will be on Friday, June 10, 2022 from 12-8 PM with a visitation from 4-6 PM at Moore Southlawn Chapel. Funeral Service will be 9:00 A.M., Saturday, June 11, 2022 at First Jenks United Methodist Church, Jenks, OK. Moore's Southlawn 918-663-2233

Elizabeth Anne Graham went to be with God on Monday, June 6, 2022 surrounded by her adoring family. She was born July 29, 1930, in Glasgow, Scotland to Elizabeth (Waddell) and Ernest Pearce, but grew up in London, England. Some of the moments... View Obituary & Service Information

The family of Elizabeth Anne Graham created this Life Tributes page to make it easy to share your memories.

Elizabeth Anne Graham went to be with God on Monday, June 6,...

Send flowers to the Graham family.