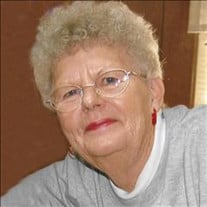 Nell West, 83, of Tulsa, was called home to Heaven on March 5, 2022, to be with her Lord and Savior and her late husband. Her two sons were by her side at the time of passing. She was born to parents, Otley and Ethel (Norris) Smith, May 24, 1938, in Overton County, Tennessee. Nell married Bob West October 15,1955. After marriage she traveled the United States and lived in 38 states while her husband did contract work on military aircraft. They arrived in Tulsa in 1963 and made that their permanent home. Nell was a housewife her entire married life and was told by Bob that, in raising their two sons, she worked harder than he did in aviation. She loved her family and friends dearly. Nell enjoyed baking, cooking, working in the yard, and taking care of her flower gardens. Nell's husband of 51 years preceded her in death, along with her parents; sisters, Vea Mason, Bea Nevins, Ruth Ledbetter, Ann Winningham; brothers, Houston Smith, Lucien Smith and Charles Smith. Nell leaves behind her sons, Gary West and his wife, Lori, of Tulsa and Rick West and his wife, Sharon, of Tulsa; granddaughters, Sarah Smittle and her husband, J.P., of Inola, Megan Harrison and her husband, Sam, of Tulsa, Kendall Scarsdale and her husband, Colin, of Jenks; great-granddaughters, Sophia Smittle, Poppy Harrison and Lila Harrison; great-grandson, Grayson Scarsdale; brother, Robert Smith of Livingston, TN and many nieces and nephews. Special thanks to the 4th floor staff at St. John Hospital in Broken Arrow, Seasons Hospice and the staff and volunteers at Clarehouse. In lieu of flowers, the family suggests contributions in Nell's memory be made to Clarehouse. Viewing will be 10am-8pm,and the family will receive friends from 5pm-7pm, Tuesday March 8, 2022. The Funeral Service will be 10am, Wednesday, March 9, 2022 both events at Moore's Southlawn Funeral Home, 9350 E. 51st Street, Tulsa. Interment will be Memorial Park Cemetery following the service. The service will be available via webcast at www.moorefuneral.com on Nell's obituary page. Clarehouse Online Donation: https://interland3.donorperfect.net/weblink/weblink.aspx?name=E348112&id=2 Moore's Southlawn 918-663-2233

Nell West, 83, of Tulsa, was called home to Heaven on March 5, 2022, to be with her Lord and Savior and her late husband. Her two sons were by her side at the time of passing. She was born to parents, Otley and Ethel (Norris) Smith, May 24,... View Obituary & Service Information

The family of Elizabeth "Nell" West created this Life Tributes page to make it easy to share your memories.

Send flowers to the West family.