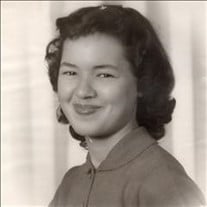 Eloise Miller Stacey, 87, of Tulsa, Oklahoma went to be with her Heavenly Father on Tuesday, February 15th, 2022. She was born on October 4th, 1934 in Foreman, Arkansas to Richard and Beatrice Miller. Eloise grew up on the family farm near Arden and was the middle of three children including both a younger and older brother. Eloise began attending public grade school at the normal age and quickly excelled in her studies making top grades each semester. Midway through her grade school years, Eloise and family moved to McAlester, Oklahoma where her father continued to farm, taking on various supplemental jobs to make ends meet. The family also opened the Miller grocery in north town McAlester where Eloise worked behind the counter, assisting customers. School continued to agree with her as each semester, she made "straight A's" on her report card and even graduated from High School a year early! At the age of 17, Eloise was introduced to her future husband, Don Stacey at a local church service. After the first date both "hit it off" as the military was shipping Don out the next day to Japan for training. The two agreed to write each other while apart and after 2 1/2 years, Don safely returned from combat and they continued to date. In May of 1953, the couple were married at a local church in downtown McAlester. A year later, they moved to Ada, OK where Don attended East Central University and Eloise worked as a secretary in the administration building. In the summer of 1956, their first son was born and by late summer, they moved to Tulsa where Don began his long career with the Tulsa Public Schools. Eloise "fell into" the housewife role, providing much support, patience and direction in helping raise a family. In the fall of 1957, a second son was born and finally, eight years later in the summer of 1965, a baby girl arrived. Living in a small, two bedroom north Tulsa house with three kids prompted the family to purchase a modest but larger home in east Tulsa later that summer. Eloise loved to bake and cook and she was often seen helping others by going to neighbors' homes sharing her goodies. She also had a "green thumb" and enjoyed growing her own vegetables. Eloise loved children and taught Bible classes at her local church. She was never too busy to help others and enjoyed being a homemaker. Eloise's favorite place to travel in the summer was to the Colorado Mountains, and the family loved camping and hiking, beating the Oklahoma summer heat there. In 1984, her first grandson was born and Eloise was so excited to be a Nana taking on the grandmother role enthusiastically! Nine years later her first granddaughter came along followed by two more grandsons whom she dearly loved. Eloise enjoyed playing board games and cards with her grandkids and whether it was Old Maid, or playing school, she enjoyed every minute! Late in life, seven great grandkids came on the scene and she greatly loved visits as well as seeing the latest pictures of how they were doing. Eloise and Don were able to celebrate 59 years of marriage. During the last three years, Don became ill and Eloise tirelessly ministered to him until his passing in 2012. A couple years later, Eloise moved into assisted living opening a new chapter of life, making new friends. Throughout her life, she faithfully kept her focus on the Lord, regularly encouraging others and being a servant to many. A smile from Eloise was always genuine and putting others before herself was commonplace. She will be greatly missed by family/friends yet it is comforting to know she is now in the arms of Jesus. Eloise was preceded in death by her parents and two brothers, RL and Glen Miller. She is survived by her two sons, Alan and David Stacey, daughter, Sheryl Cooper; grandchildren, Austin Stacey, Tyler Carner, Chelsea Benoit, Mackensy Tate, Rhianna Cooper, Cody Cooper, and Shane Stacey; great-grandchildren, Natalie and Samuel Austin Stacey, Arlo Carner, Oliver and Jack Benoit, Samuel Wade and Sophia Stacey. Graveside Service will be 2:00 P.M., Saturday, February 19, 2022 at Floral Haven Cemetery, Broken Arrow, OK. Moore's Southlawn 918-663-2233

Eloise Miller Stacey, 87, of Tulsa, Oklahoma went to be with her Heavenly Father on Tuesday, February 15th, 2022. She was born on October 4th, 1934 in Foreman, Arkansas to Richard and Beatrice Miller. Eloise grew up on the family farm near... View Obituary & Service Information

The family of Eloise Miller Stacey created this Life Tributes page to make it easy to share your memories.

Eloise Miller Stacey, 87, of Tulsa, Oklahoma went to be with...

Send flowers to the Stacey family.