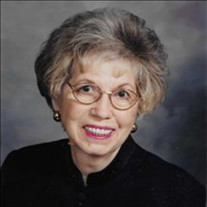 Elza Nerrine "Rene" Danford passed away peacefully on November 9th, 2021. Born in Harrison, Arkansas to Harry and Oza Jones, she was the 5th of 6 children. Her family moved to Haskell where she grew up on a farm. She remembered that her job as a child was to carry water to the field workers picking cotton. After graduating from high school she went to work at Muskogee General Hospital where she met the love of her life, Harold Danford. They were married in 1950. They moved to California, Arizona and eventually settled in Florida. They were married for 19 years before Harold's untimely death from a heart attack. She never remarried but had a running joke about how she was always looking for a boyfriend. She stayed busy with her career as an insurance adjuster with Allstate. She enjoyed traveling and took many international trips with her best friend, Helen. She had a life-long love for dogs and enjoyed spoiling her furbaby companions. After retirement, she moved back to Oklahoma to be close to several of her siblings where they all enjoyed each others company. Rene loved the lord and was a faithful member of Southern Hills Baptist Church where she was active with her Sunday school class. Their group enjoyed many activites and went on yearly trips to Branson and foliage tours. Eventually she moved to Brookdale Assisted Living Center where she lived for the last 4 years, she was 94 at her passing. Rene was preceeded in death by her parents, Harry and Oza Jones, her husband Harold Danford, her sisters, Thelma Smith, Jeanette Johnson, Fay Benson, Vivian Kidd, her brother and half-brother, Dave Jones and Van R. Jones. She is survived by her many beloved nieces and nephews. Funeral Service will be 2:00 P.M., Wednesday, November 24, 2021 at Moore's Southlawn Chapel, 9350 E. 51st, Tulsa, OK. Moore's Southlawn 918-663-2233

Elza Nerrine "Rene" Danford passed away peacefully on November 9th, 2021. Born in Harrison, Arkansas to Harry and Oza Jones, she was the 5th of 6 children. Her family moved to Haskell where she grew up on a farm. She remembered that her job... View Obituary & Service Information

The family of Nerrine "Rene" Danford created this Life Tributes page to make it easy to share your memories.

Send flowers to the Danford family.