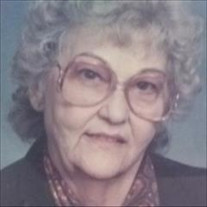 Ethel Marie Clark, 98, passed away on Sunday, January 23, 2022. It was her father's birthday. Ethel was born on Thursday, January 10, 1924, in Fort Jennings, Ohio, to Anthony and Myrtle Klausing. She has a sister, Alice and a brother, Leonard who preceded her in death. Ethel met her husband, William Clark "Bill" on a blind date. Things must have gone well; they were married on March 4, 1946. They settled in Fort Wayne, Indiana and started their family. In 1958, Bill and Ethel moved to Tulsa, Oklahoma. The moved into a new neighborhood where they joined other young families to help build a new school, St. Pius X Catholic School. They and other families did construction work, painted walls and planted trees. All of their children and grandchildren attended the school. In 1980, Ethel became the school secretary, serving for thirteen years. In 1993, she retired from the school, and she and Bill did some traveling before they settled into retirement. Ethel and Bill were married for 68 years before his death in 2014. Ethel is survived by her six children. Linda (Bill) Scattergood, Barbara (Scott) Etter, Janet (Larry) Leeper all of Tulsa, Oklahoma, Mike Clark of Mannford, Oklahoma, Beth Clark of Tulsa, Oklahoma and Jim (Laura) Clark of Bethlehem, Georgia. Ethel has eight grandchildren, eight great-grandchildren and one great-great-grandchild. In lieu of flowers, the family requests donations to the St Pius X Catholic Building Fund. Ethel and her children would like to thank her granddaughter, Teresa Leeper, for taking such wonderful care of her grandmother. We don't know what we would have done without you, Teresa. Rosary: 7:00 PM Monday, January 31, 2022 at St. Pius X Catholic Church. Funeral Mass: 1:00 PM Tuesday, February 1, 2022 at St. Pius X Catholic Church. Interment: Calvary Cemetery in Tulsa, Oklahoma

Ethel Marie Clark, 98, passed away on Sunday, January 23, 2022. It was her father's birthday. Ethel was born on Thursday, January 10, 1924, in Fort Jennings, Ohio, to Anthony and Myrtle Klausing. She has a sister, Alice and a brother, Leonard... View Obituary & Service Information

The family of Ethel Clark created this Life Tributes page to make it easy to share your memories.

Send flowers to the Clark family.