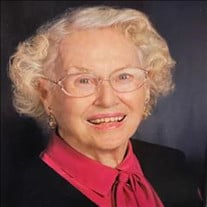 Florence Rosenell Hill Cunningham (Rosy) departed this earth on September 29, 2021 to her heavenly home. Rosy was born to Claude A. and Frances May Hill on October 21, 1922, in Richmond, Ray County, Missouri. She was united in marriage with Willis C. Cunningham on August 27, 1950 in Miami, OK. Rosy was preceded in death by her parents Claude and Frances Hill, and her loving husband of 57 years, Willis C. Cunningham. Rosy is survived by her two sons: Scott Alan Cunningham (Nancy) of St. Louis, MO and Curtis Lane Cunningham (Judy) of Sheridan, AR, 4 grandsons, 1 granddaughter, 3 great-grandsons, and 6 great-granddaughters, all of whom she was very proud of and enjoyed spending time with, as well as a number of nieces, nephews, and friends. She attended Miami OK, public schools and NEO A&M College. She married Willis C. Cunningham on August 27, 1950 in Miami, OK. Eventually Rosy and her family relocated to Tulsa, Oklahoma where she was a resident for more than 30 years. Rosy was a loving wife, mother, sister-in-law, aunt, grandmother, and great-grandmother. She was a tireless gardener, history and genealogy enthusiast, and homemaker. Rosy enjoyed serving her community and country. She helped her mother tend the graves of British RAF student pilots killed during pilot training in Miami, OK. She was awarded a brick from Memorial High School for her volunteer work cleaning around the school and in surrounding La Fortune Park. Later, Rosy was awarded a plaque from the Sertoma Society for her gardening around Asbury United Methodist Church, where she was a longtime member. Rosy passed on peacefully after a brief illness at her son Curtis'home in Sheridan, AR, surrounded by loved ones. Visitation will be 6-8PM, Thursday, October 7, 2021 at Moore's Southlawn, 9350 E. 51st, Tulsa, OK. Funeral Service will be 10:00 A.M., Friday, October 8, 2021 at Moore's Southlawn Chapel. Webcasting will be available. Moore's Southlawn 918-663-223

Florence Rosenell Hill Cunningham (Rosy) departed this earth on September 29, 2021 to her heavenly home. Rosy was born to Claude A. and Frances May Hill on October 21, 1922, in Richmond, Ray County, Missouri. She was united in marriage with... View Obituary & Service Information

The family of Florence Rosenell "Rosy" Cunningham created this Life Tributes page to make it easy to share your memories.

Send flowers to the Cunningham family.